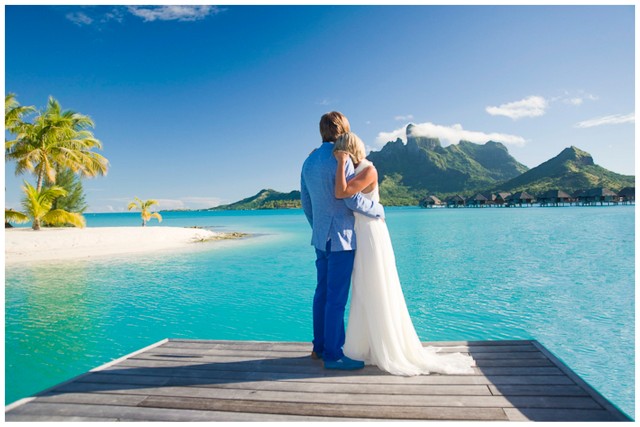 Today’s couple shoot is a little different – it was shot in the tropical paradise of Bora Bora. Where-a where-a, you ask? Well, let’s just say it really is in the middle of nowhere – an island in the Pacific that forms part of French Polynesia. And man alive, but it is BEAUTIFUL. When photographer Helene Havard (who is lucky enough to wake up to this view every day) contacted me, I started dreaming of wading into those perfect blue seas (and to be honest with you, I haven’t stopped since). It’s the ultimate getaway for an elopement or honeymoon (if you can handle the days of travelling it takes to get there). The Ukranian couple in this shoot were lucky enough to be celebrating their honeymoon on the island at the Four Seasons, and asked Helene to take some shots of them (of course, it doesn’t hurt that they could be models – and how gorgeous is her dress?). I just love this idea, of having a quick professional shoot done at your honeymoon destination – it’s such a happy time, and they’re something you’ll treasure forever. Much better than those Facebook-style self-portrait pics, or asking a stranger to take a pic of you (where invariably they’ll cut your heads or bodies out). Anyway, something to think about, even if you’re not going to the ends of the earth for your honeymoon. In the meantime, make yourself a cup of tea, pretend it’s a pina colada, and prepare to be wowed. END_OF_DOCUMENT_TOKEN_TO_BE_REPLACED