Happy weekend! I have a special little bonus feature for you today, and just a tiny taster of a stunning wedding I’ll be featuring next week. Gina is the first bride I’ll be featuring who requested one of my inspiration boards, and I wanted to show you a bit of how her original ideas developed before you catch the final result. When Gina first emailed me, she was feeling like she had all these ideas but couldn’t quite picture it coming together, and wanted the design of her wedding to look cohesive. First of all, I should say that this is such a common feeling amongst brides – in fact, I hear this from almost everyone who requests a board – so if you have reached that stage then be reassured that it’s completely normal! In fact, creating a board at this stage in the process (or revising one you already have) is a great idea, because it lets you see the bigger picture (and sometimes spot from a distance when one element isn’t working with the others). Anyway, back to Gina, who had her heart set on a Moroccan theme for her and fiance Ben’s big day, but wanted to make sure it didn’t turn out looking like a tacky theme party.

Gina had a couple of colour schemes in mind, and when I created her board, I chose the one that was clean white and green, with a little touch of deep purple (using a white base with little touches of colour moved away from the Arabian Nights party vibe). Gina had access to Moroccan decor items, and I suggested scattering these around, with hanging lanterns as a key piece. For the tables, I suggested either a print tablecloth or a white one with tiles used as a runner. I also suggested low tables and a bedouin-style breakout area, and directed Gina to a few links, including this gorgeous Sunday Suppers take on Moroccan dining. Here’s the inspiration board I made for Gina: 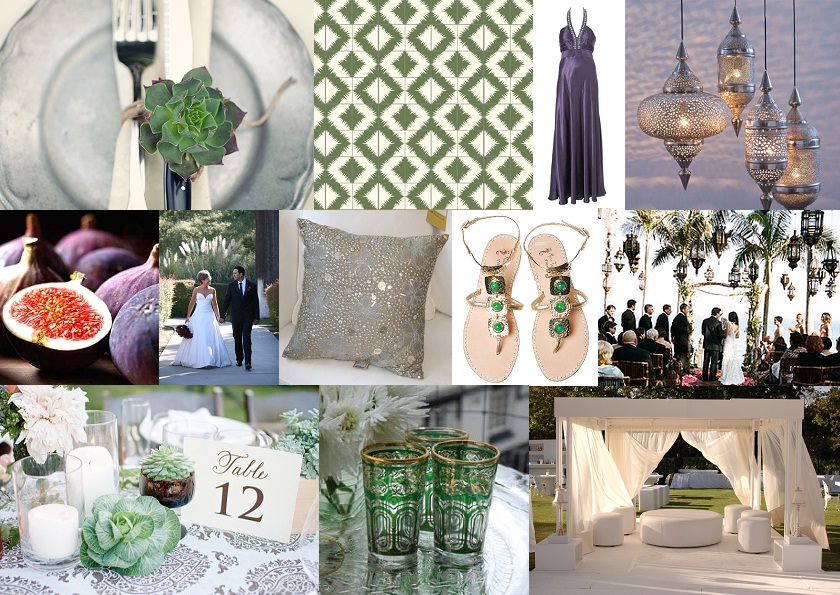