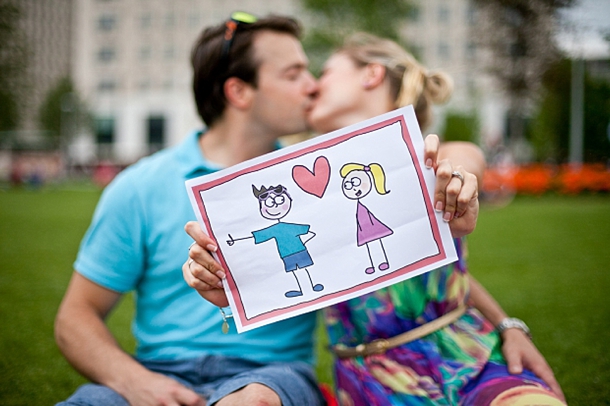 A few years back, my dear friend Lenore sent me a link to a South African blog called indieBerries. Think you’ll like this, she said. And that was how I entered the deliciously barmy world of Che, writer of fun blog posts, drawer of hilarious cartoons, scrapbooker extraordinaire. Che is one of those people you instantly like, even just via the internet – she’s bubbly and warm, creative and ever so slightly mad. She also makes beautiful stationery, which I used as a thin pretext to get in touch years ago (she kindly wrote a guest post for me then). So of course, when she got proposed to in spectacular fashion and started planning a wedding, I declared myself her new bestie. Conveniently, she was going to be in London for a few months, so I’ve since got to spend some time with her and she is exactly as I’d imagined – which means that I dig her a lot in person as well as online. All of these would have been reasons on their own that I’d be excited to feature her engagement shoot with fiance Warren (or ‘The Warr’ as I can only ever think of him after Che dubbed him that on her blog – it’s fine, he calls me SBB), especially when I found out that their photographer was none other than the awesome Anneli Marinovich. But when I discovered that they had the CUTEST concepts for their shoot, I knew it would be one of my favey couple shoots ever. First, Che and Warren brought the ‘love locks’ tradition to London, adding their own little lock of love to Hungerford Bridge and throwing the key into the Thames. Then they headed for the London Eye, and had a quintessentially London picnic, where each gave the other a love letter to read while Anneli snapped away. What I love most is that these concepts weren’t just used as props – they were catalysts for genuinely romantic and emotional moments between these two lovebirds, and the expressions of happiness on their faces just say it all. They both seem to glow in each other’s company – just imagine how amazing their wedding is going to be! Be sure to read on below for details on the shoot, and for the AWESOME story of how they met (make sure you head over to indieBerries for how he proposed too!). Che and The Warr: huge congratulations! END_OF_DOCUMENT_TOKEN_TO_BE_REPLACED