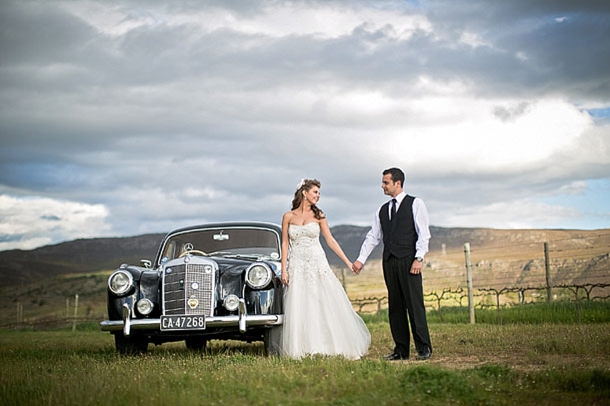 A few months ago, as you may recall, I opened up our Real Life Bride feature to our readers. I was hoping to hear from one or two of you, but instead, within days, my inbox was full. The BEST kind of emails – mails full of passion and excitement and plans and inspirations. I felt like I could picture each and every one of those weddings, and even though I could only pick one (okay, I picked three), I knew it wasn’t the last I wanted to hear of the others. One of my favourites was a submission from self-confessed “huge SouthBound Bride follower” Estie, whose big day was too soon for the series, but who described in detail the French-inspired fantasy wedding she and her fiance had dreamed up (with a bit of help from SBB!). She described a spring wedding, romantic and glamorous in Parisian shades of mauve, pewter, black & white, with a water feature and a transparent marquee full of twinkling lights reflecting the stars above. It sounded… well, dreamy is the only word I can come up with (even if it makes me sound like I should be at a sock-hop). Anyway, fast forward to a few weeks ago when talented Cape photographer Adene told me about her latest wedding, which she described as A-M-A-Z-I-N-G. And amazing it was. It also turned out to be Estie’s, and I’m thrilled to be sharing it with you today! (Oh, and PS: THAT CAKE!) END_OF_DOCUMENT_TOKEN_TO_BE_REPLACED