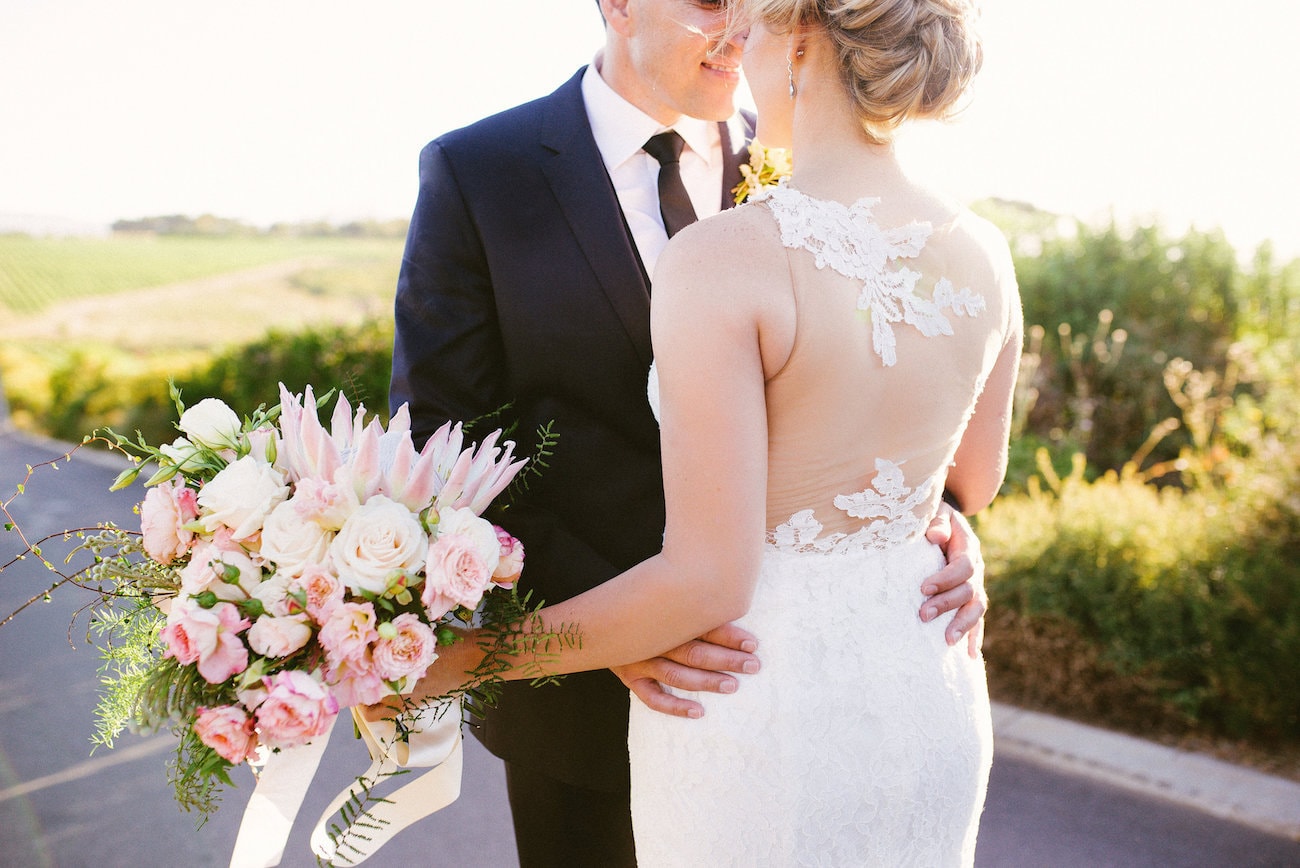 Take two fun-loving sweethearts who met in London town, add a palette of pinks and a pop of modern copper geometric details, serve it all up in the contemporary-meets-vineyard surroundings of Waterkloof, and… well. The results are every bit as fabulous as that sounds! Paul and Catherine have that lovely combination of being a couple who are thoroughly relaxed about details, but have loads of lovely ones to show off, from a spectacular protea bouquet to one of the most darling mismatched bridesmaid lineups I ever did see. And that’s probably thanks to the talents of the lovely Theresa of Creation Events, who styled and planned the event to perfection, joining a team of talented pros that included the awesome Cheryl McEwan and hair and makeup stylista supreme, Ida Webster. 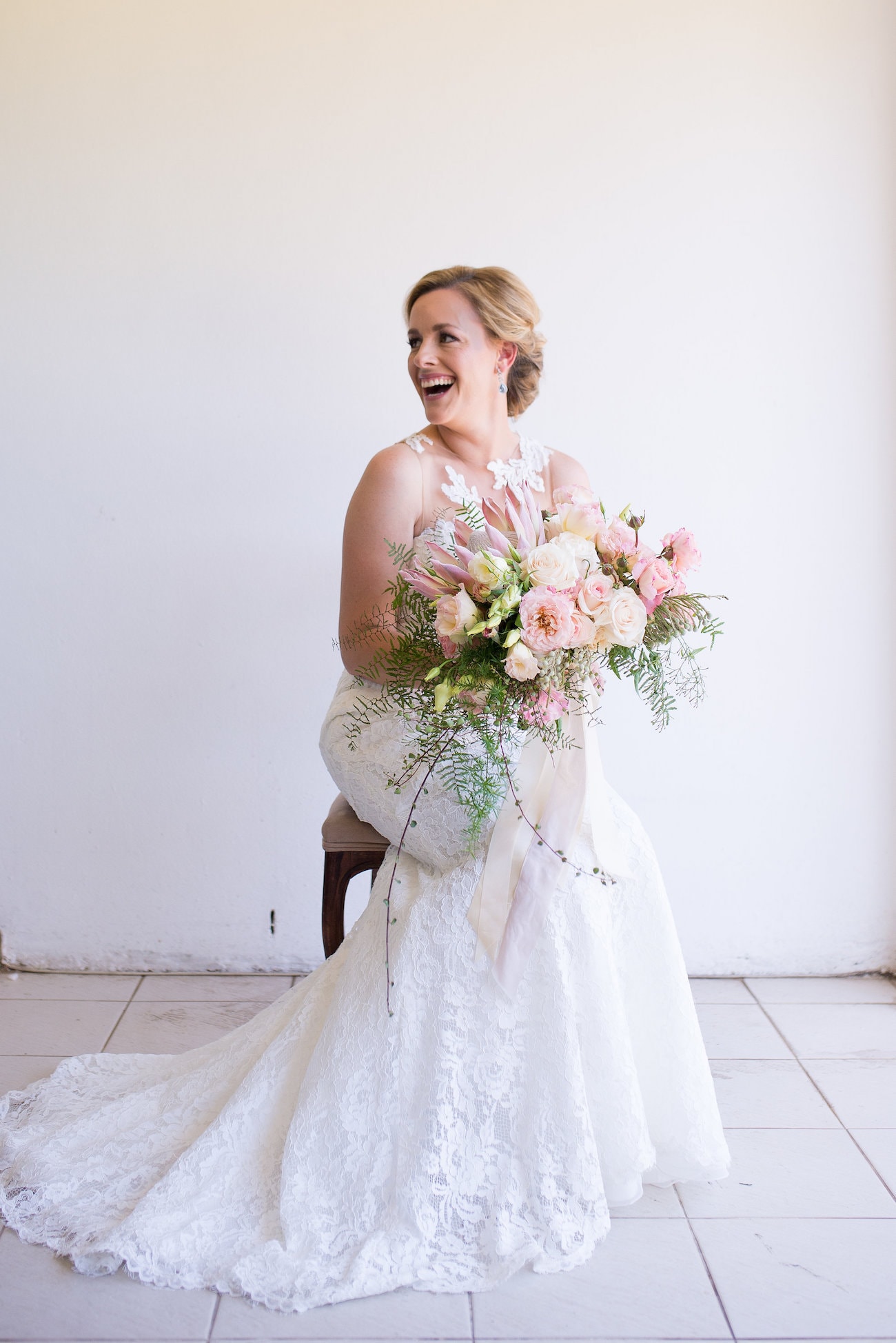 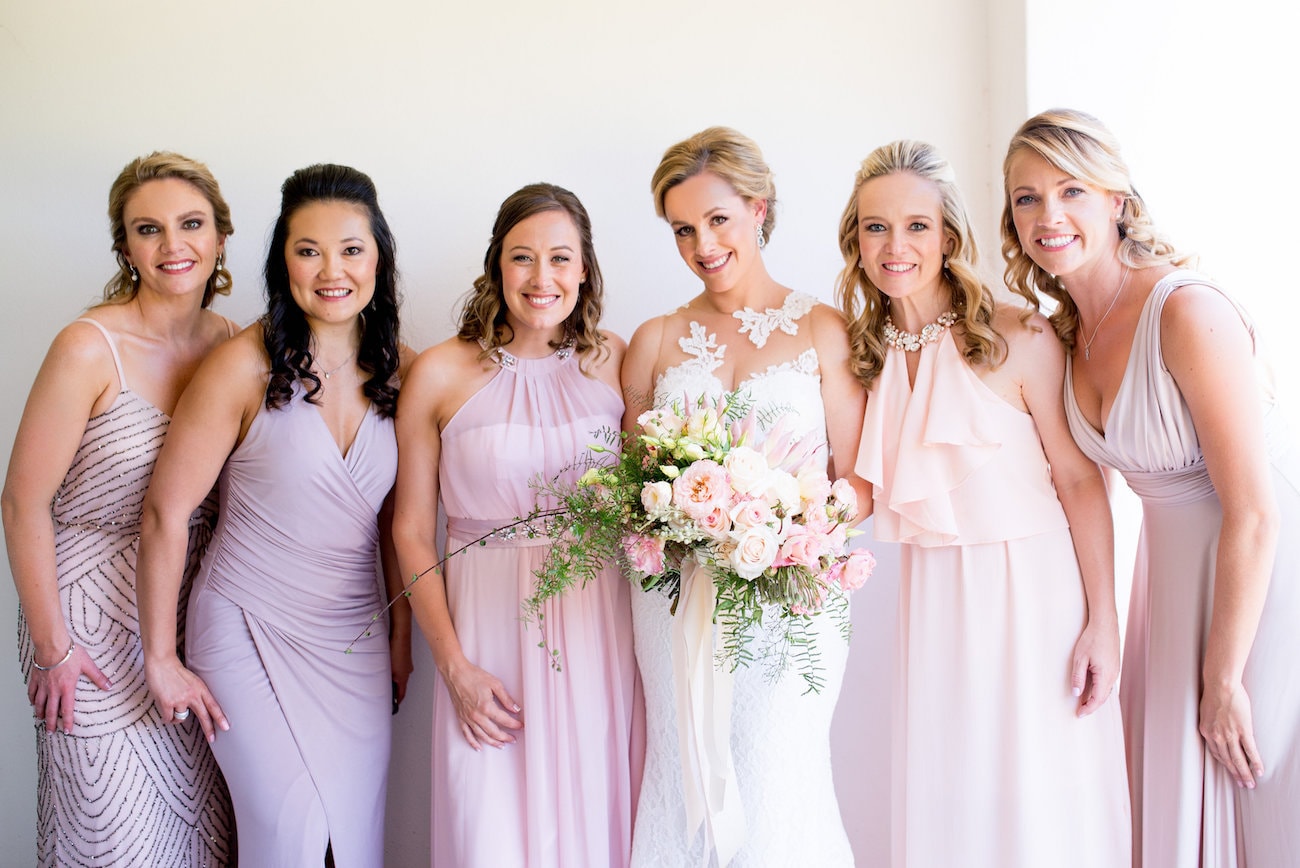 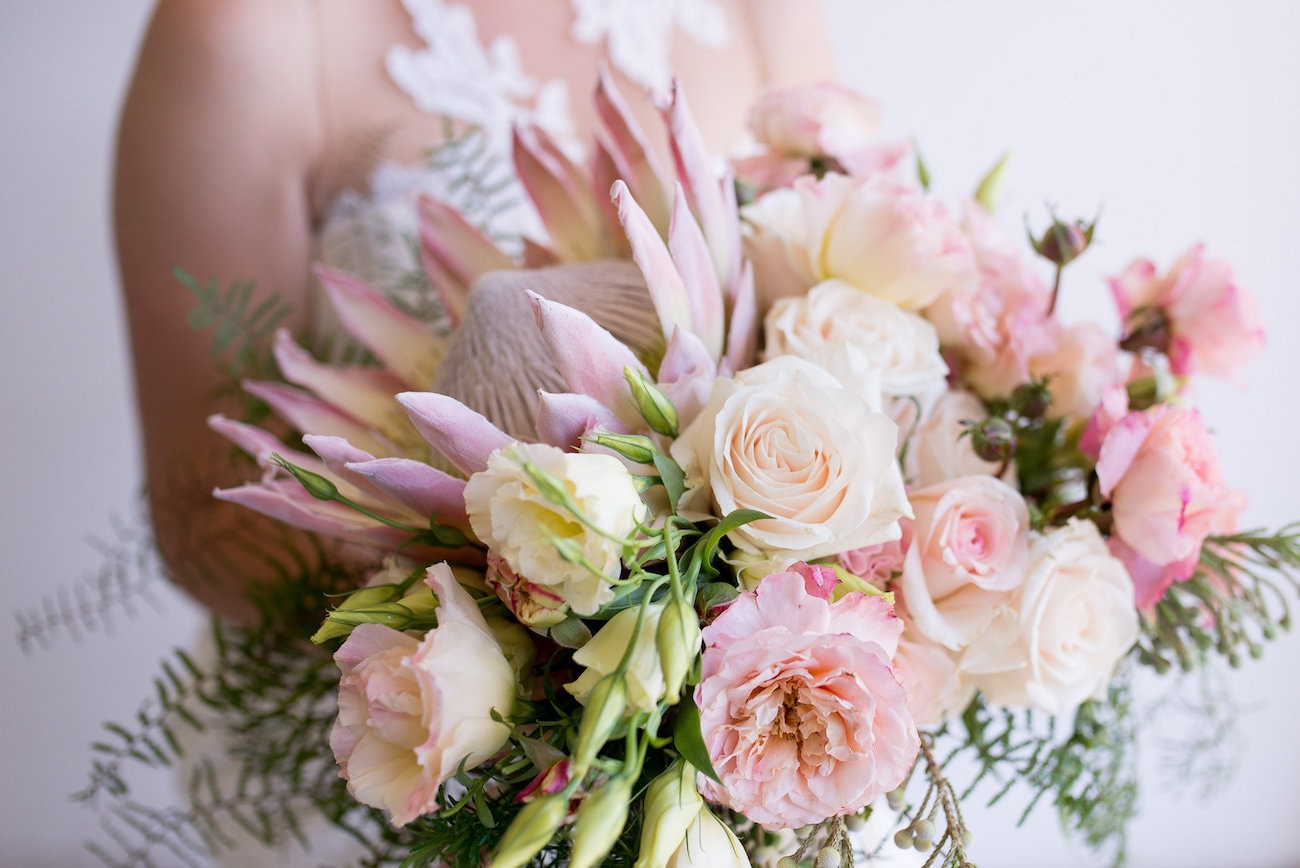 Love Story
The romantic meeting was facilitated by the classy dating website plentyoffish.com! It has the option a setting a radius to your search criteria. Paul was tired of travelling north of the river to date (and is a bit of a lazy dater) and had set his search criteria to within five miles – he lived in Wimbledon and I lived in Earlsfield. Match made.

The Proposal
During a weekend of fabulous birthday spoils. Paul took me to a Michelin star dinner on Friday night with friends and then on Saturday to a night away at a boutique hotel. I stepped out of the bathroom with my makeup in my hands and he was on the floor on one knee. Apparently, he had planned to propose more elaborately the following weekend, but had the ring with him just in case the mood struck him… It struck him! 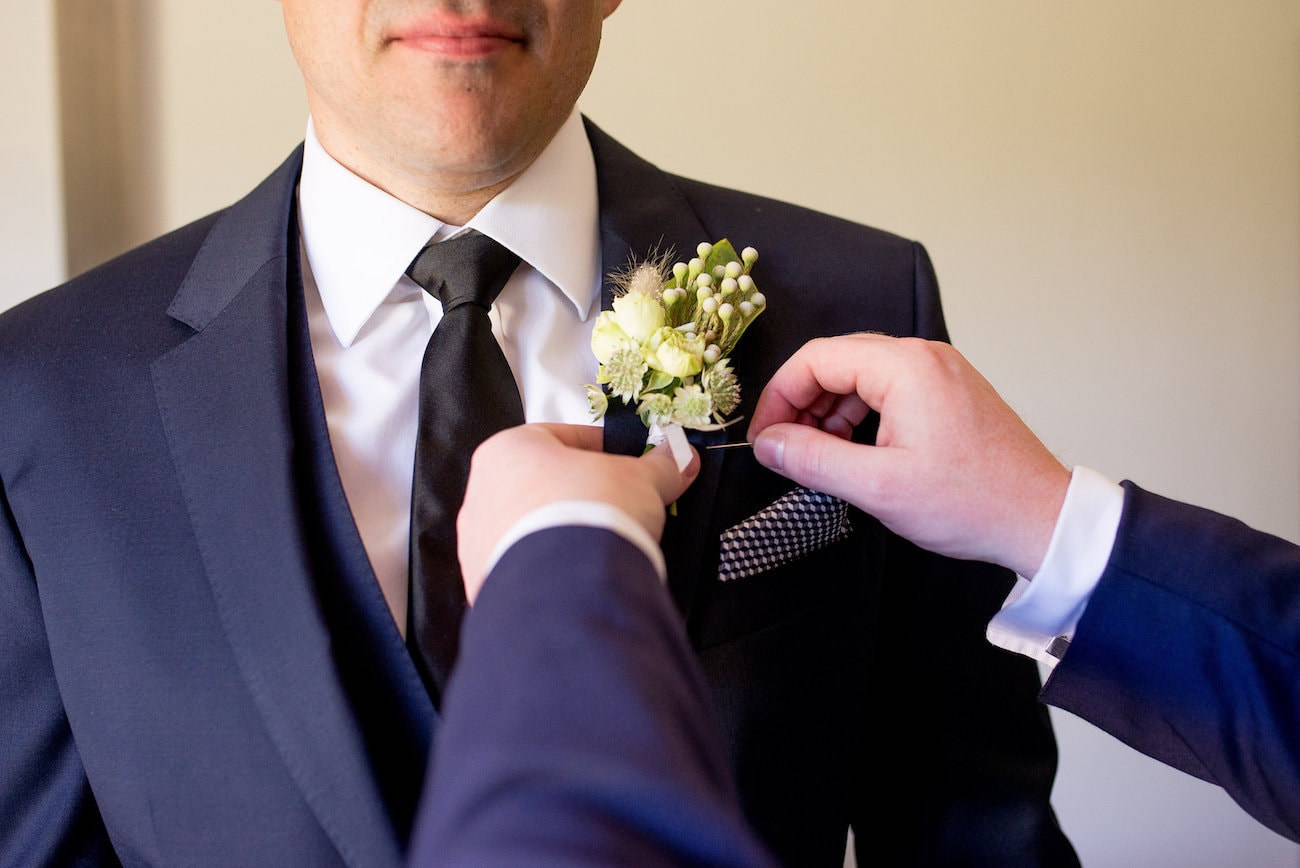 The Venue
Firstly the view is amazing. It’s the best of Cape Town in one place – vineyards, mountains and sea. We really wanted a venue where we could have both the ceremony and reception in the same place and for the reception you have the choice of outside in the garden or the wine cellar. Due to the notorious Cape Town wind in November, we chose the cellar. As we are both foodies, we also wanted a venue with amazing food, which Waterkloof has.

Wedding Style
I’m not detail oriented at all and know nothing about what I call ‘the pretty stuff’. We went with a neutral colour scheme which naturally progressed to include blush. The venue has the most amazing mix of modern geometry with natural elements and I wanted it to feel natural. Thankfully we had Theresa of Creation Events who co-ordinated all suppliers, including the amazing florist. My maid of honour designed the stationery and Theresa found us a great local printer. 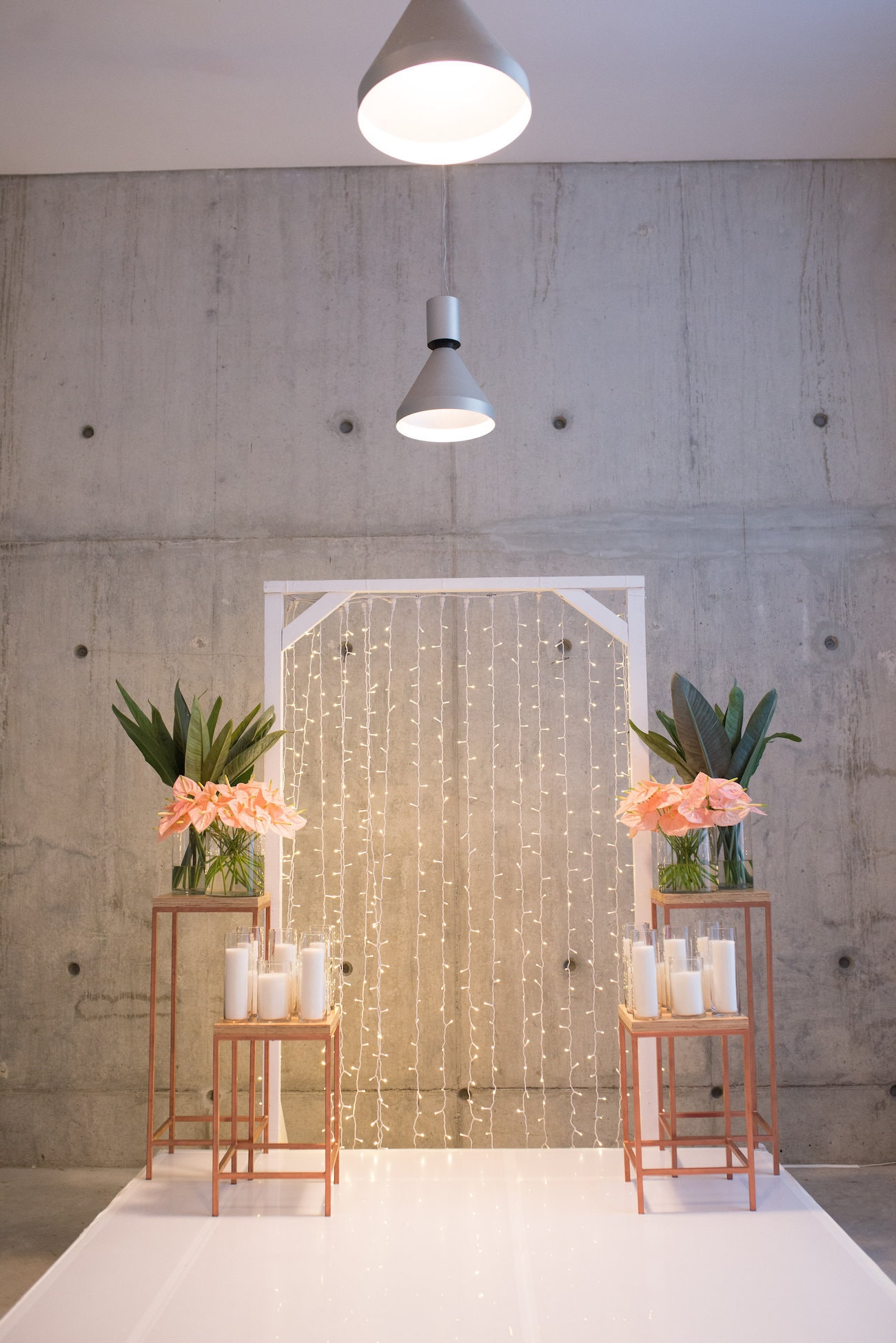 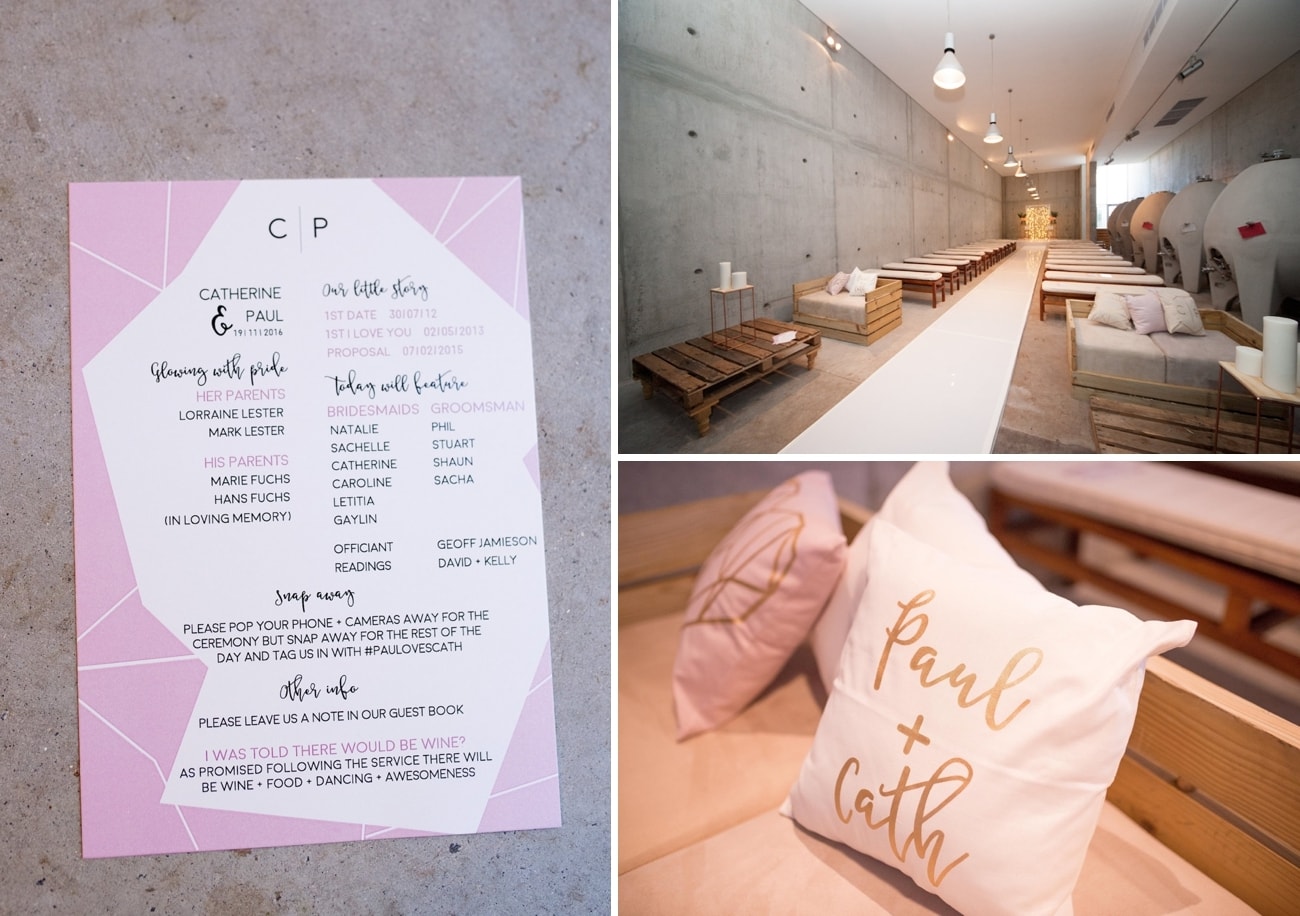 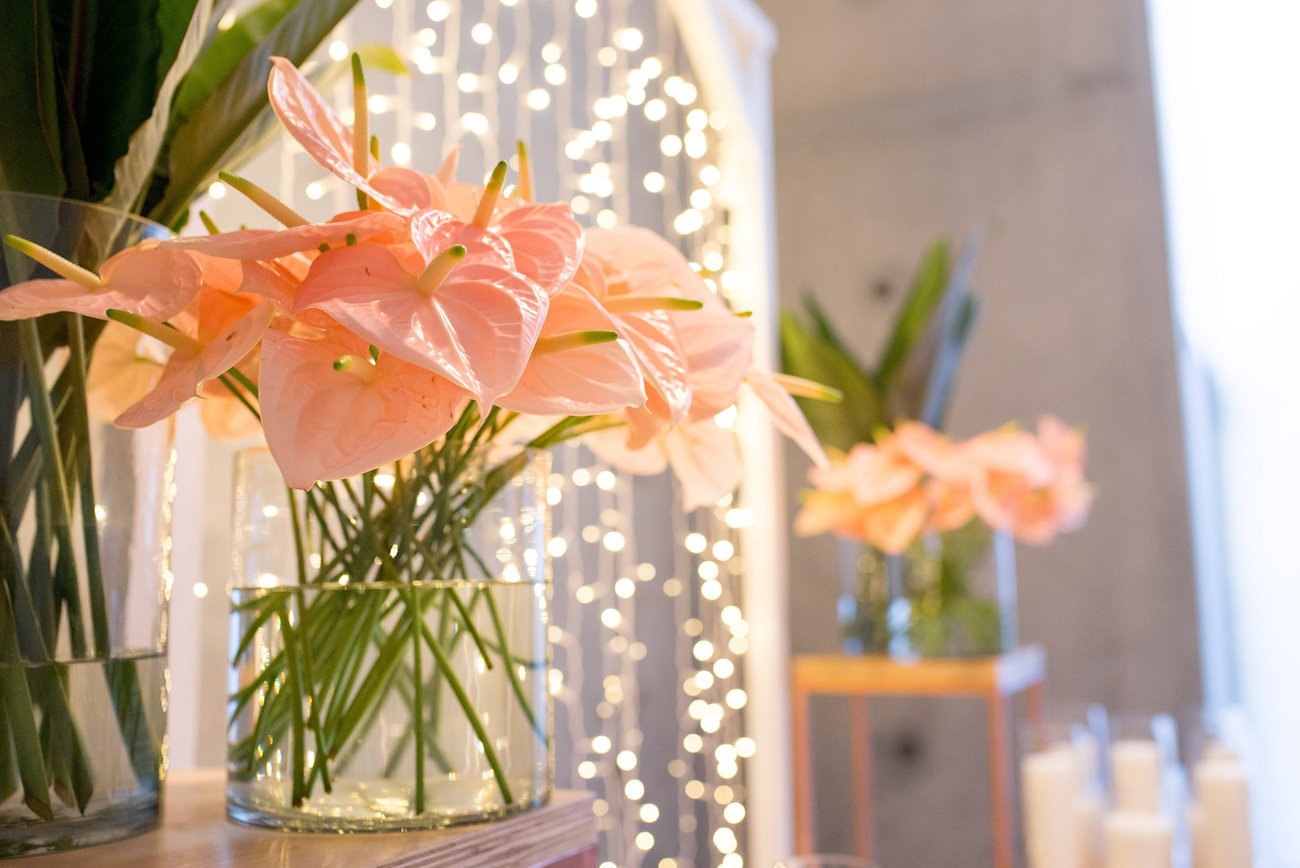 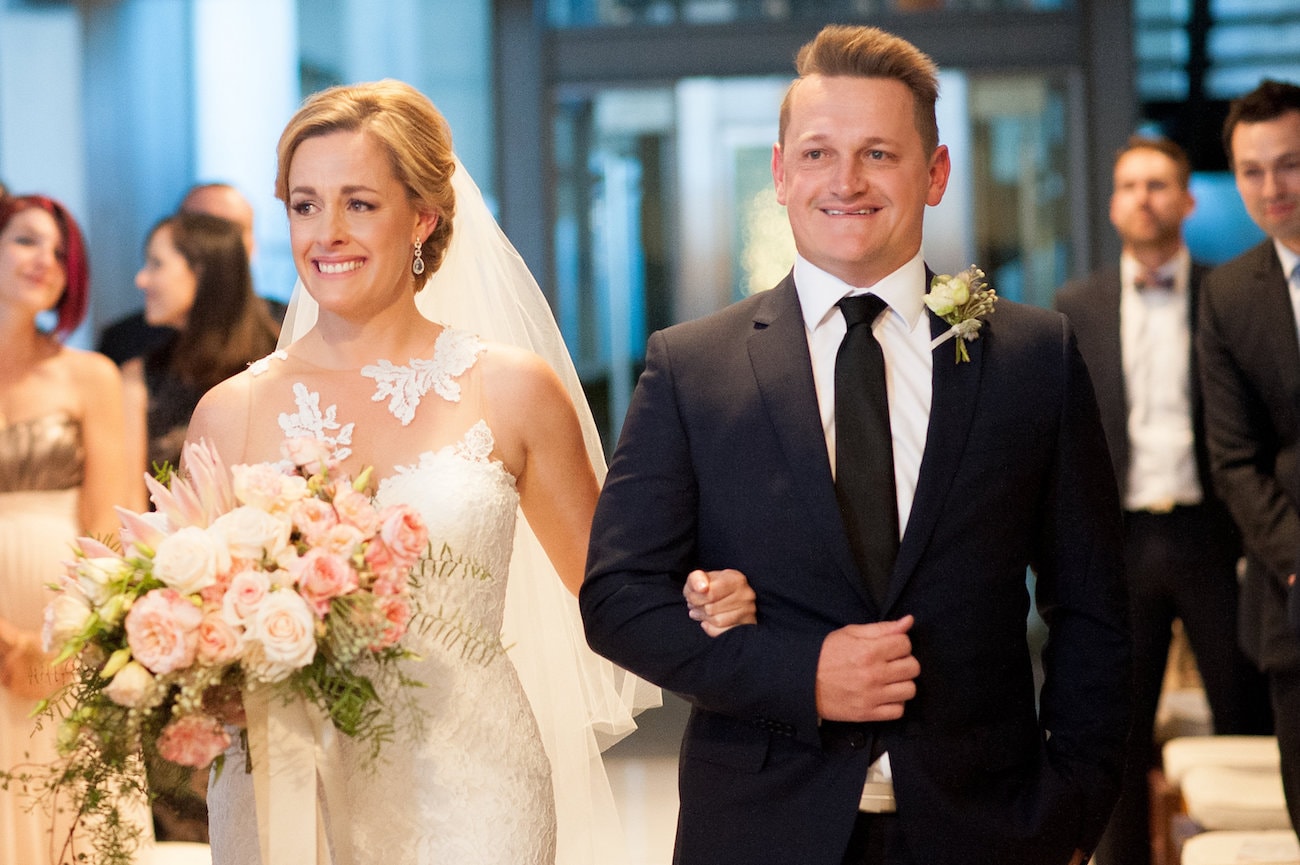 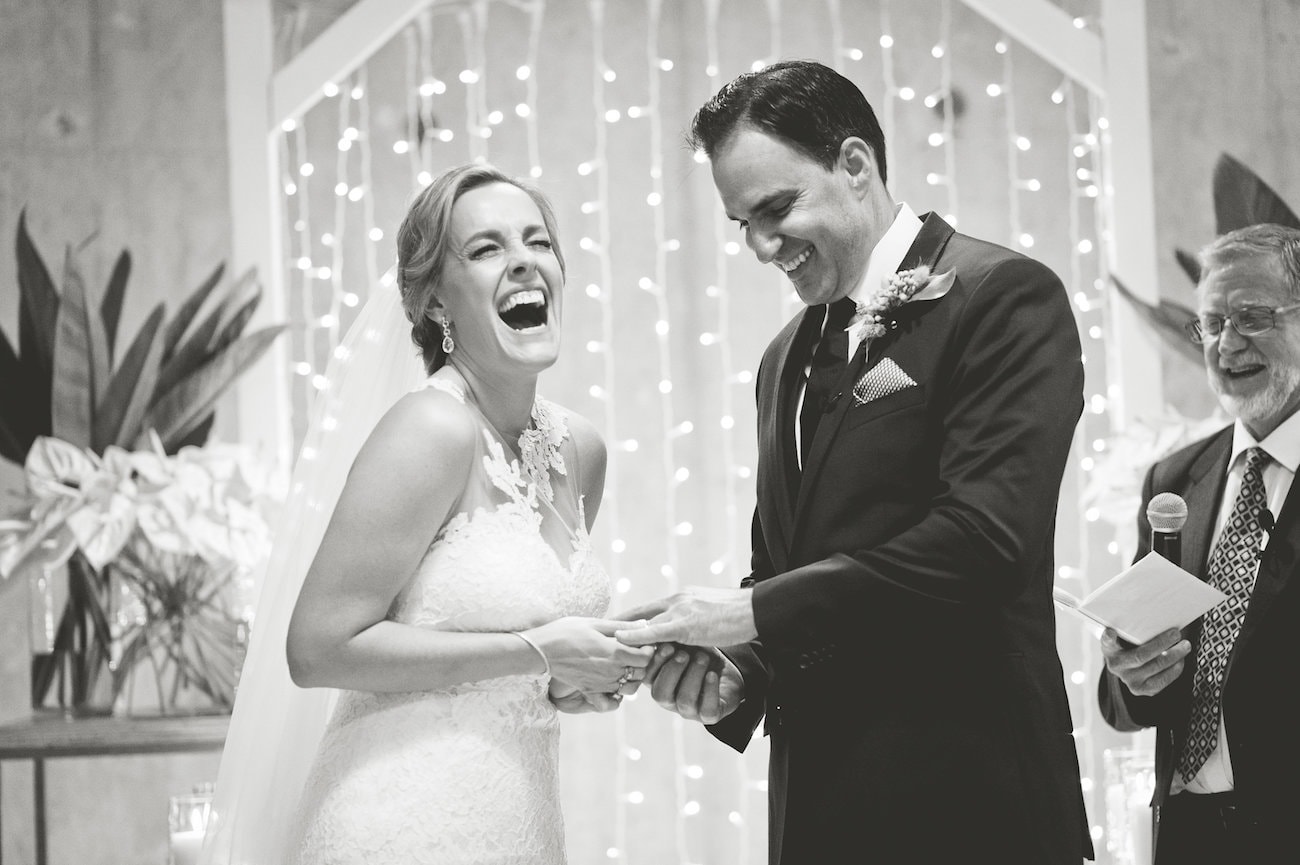 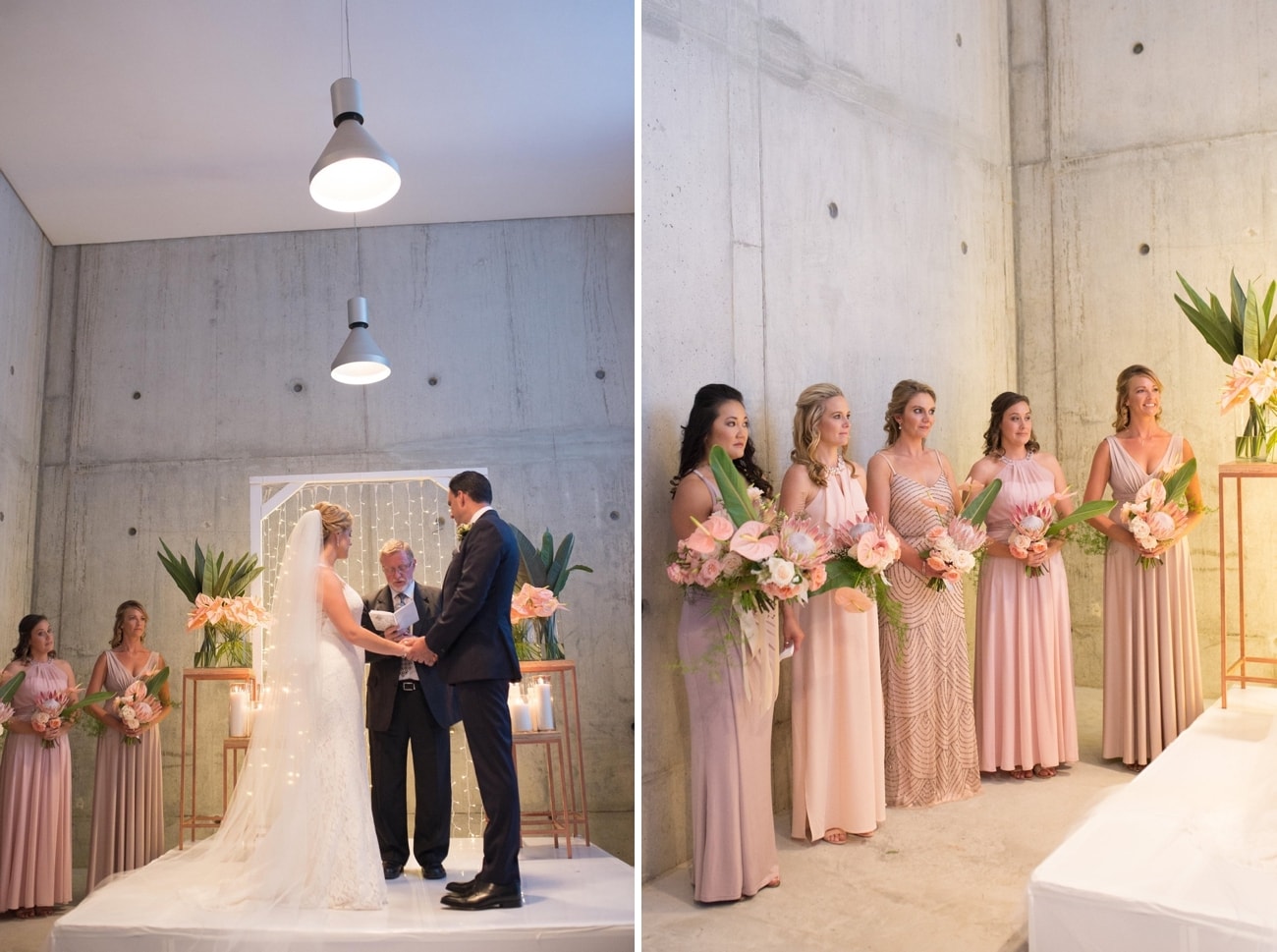 Wedding Details
As we had 90% of our guests travelling from outside of Cape Town (40% from outside of SA) we wanted to appreciate local culture and gems. We wanted our decor to blend in to the natural surroundings of the venue, but have a distinct South African flavour. Our flowers included proteas and my father made biltong. Favourite details were the view, the food and the flowers. We also had some fun elements we loved like a cake made from different cheeses instead of a traditional wedding cake. We also had a glow stick station which was a massive hit.

DIY Elements
We aren’t a massive ‘DIY’ couple but we had a couple of special items. The biltong made by my dad. My maid of honour also made stencils that my mom and I used to hand paint the decorative scatter cushions. 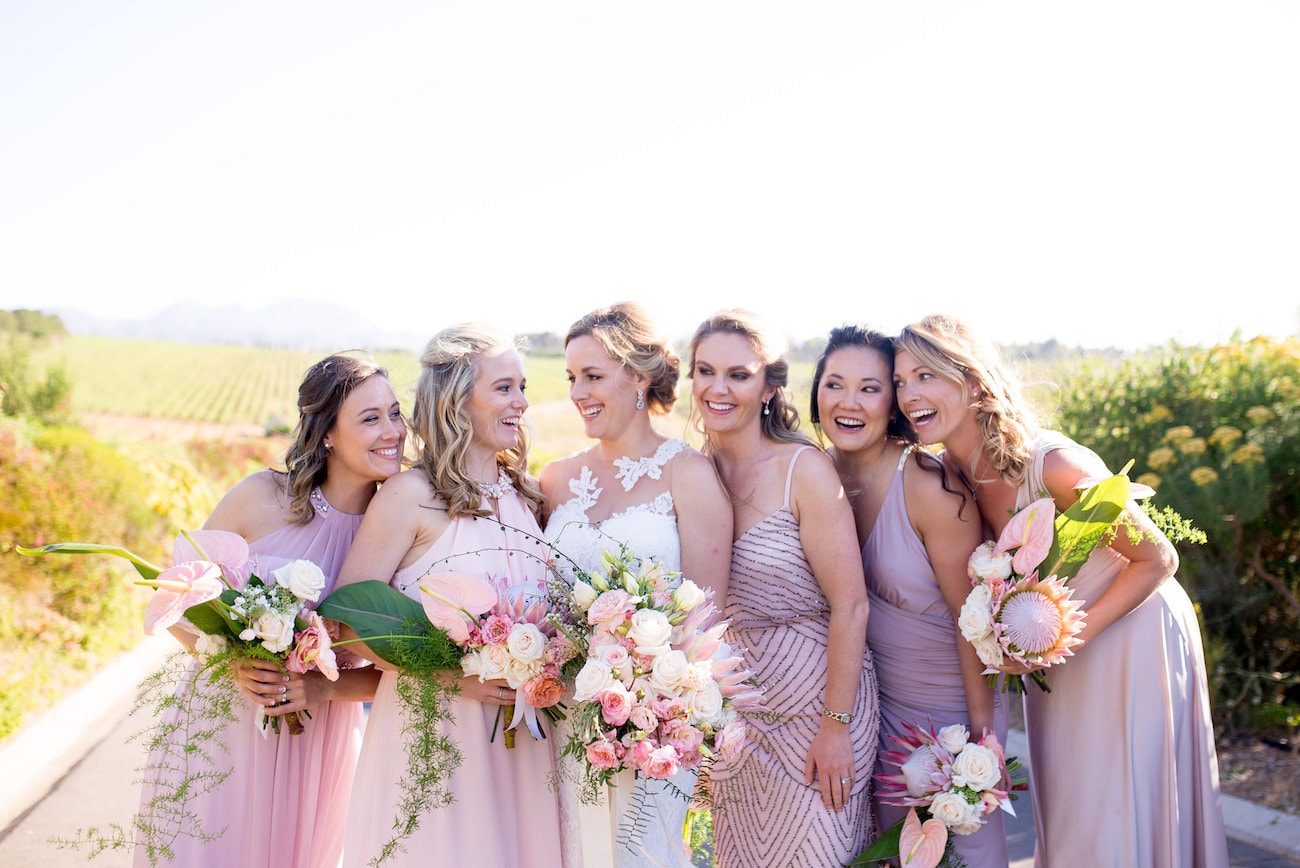 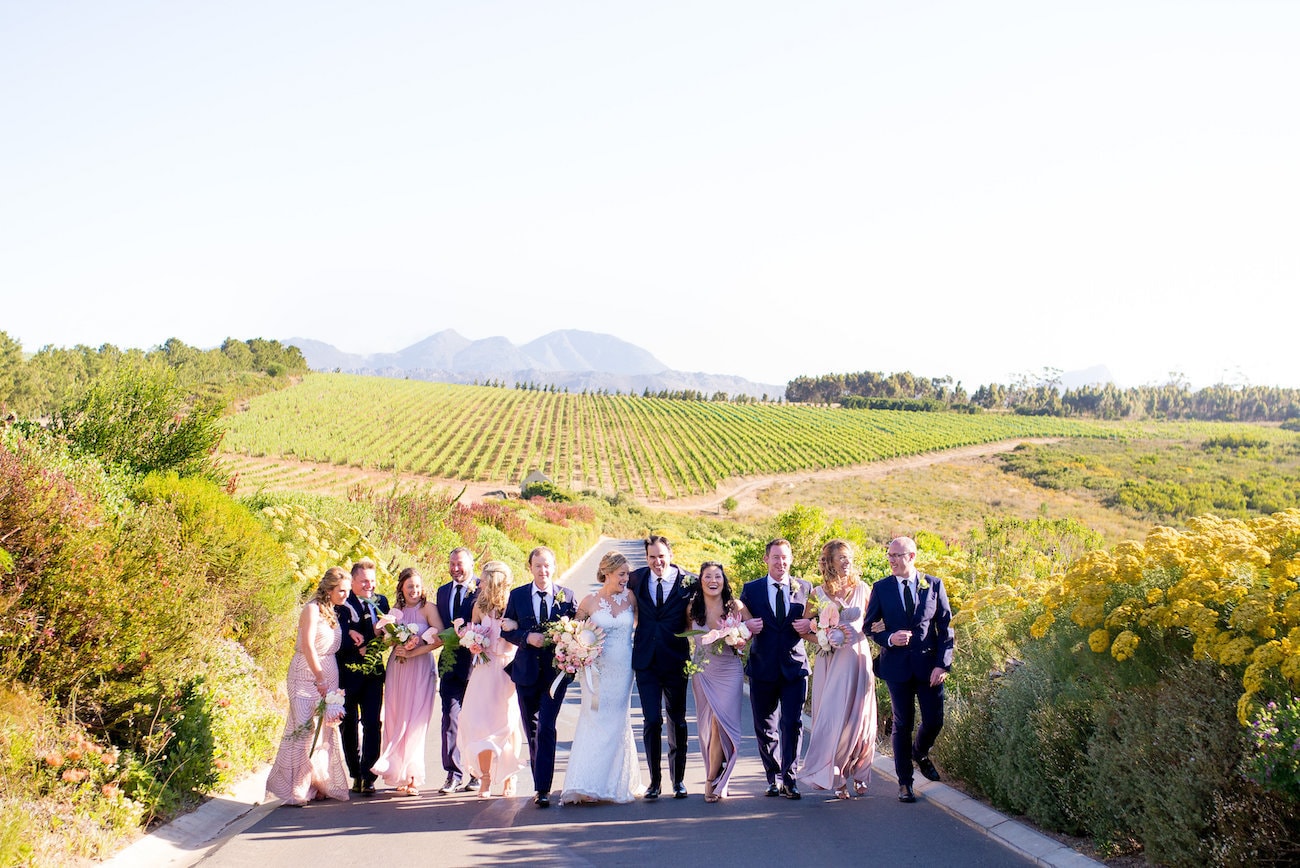 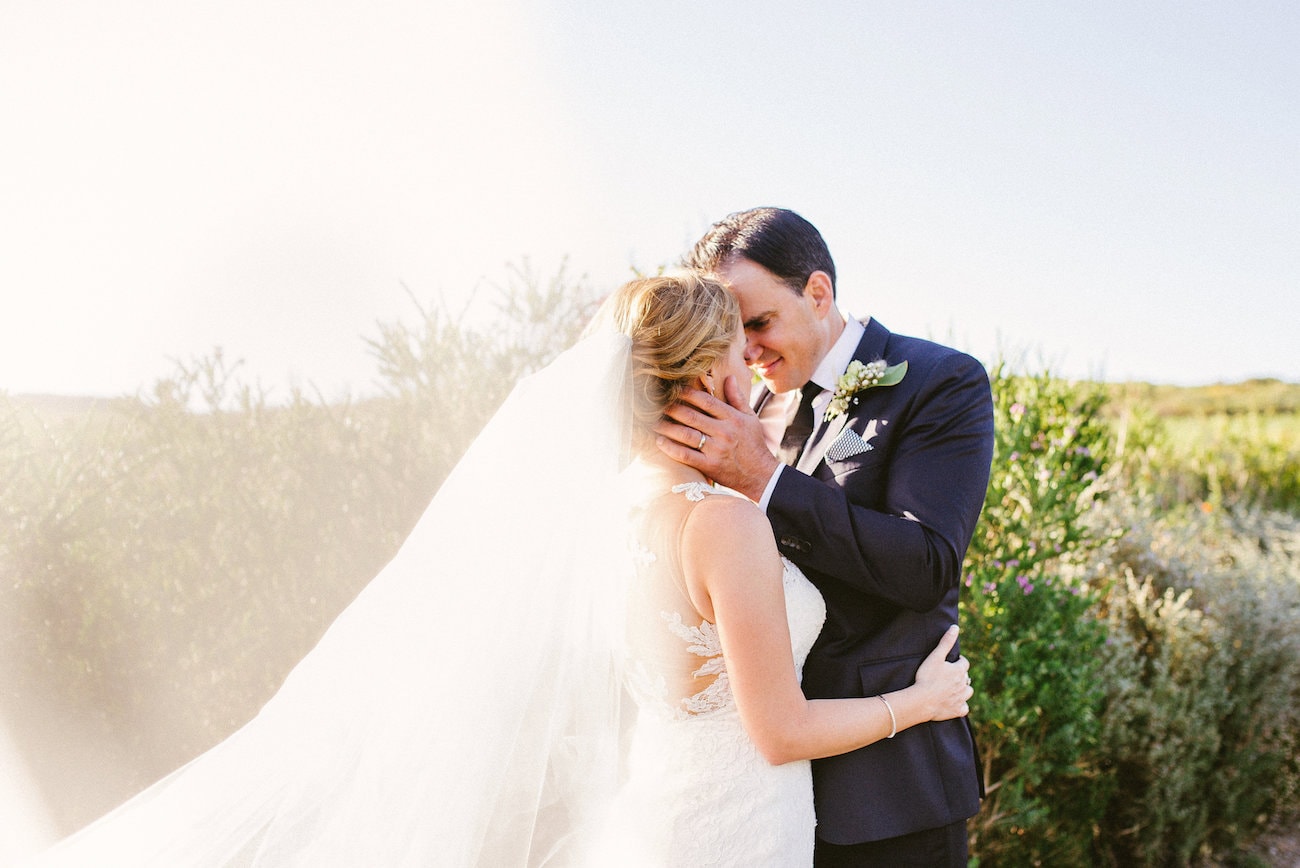 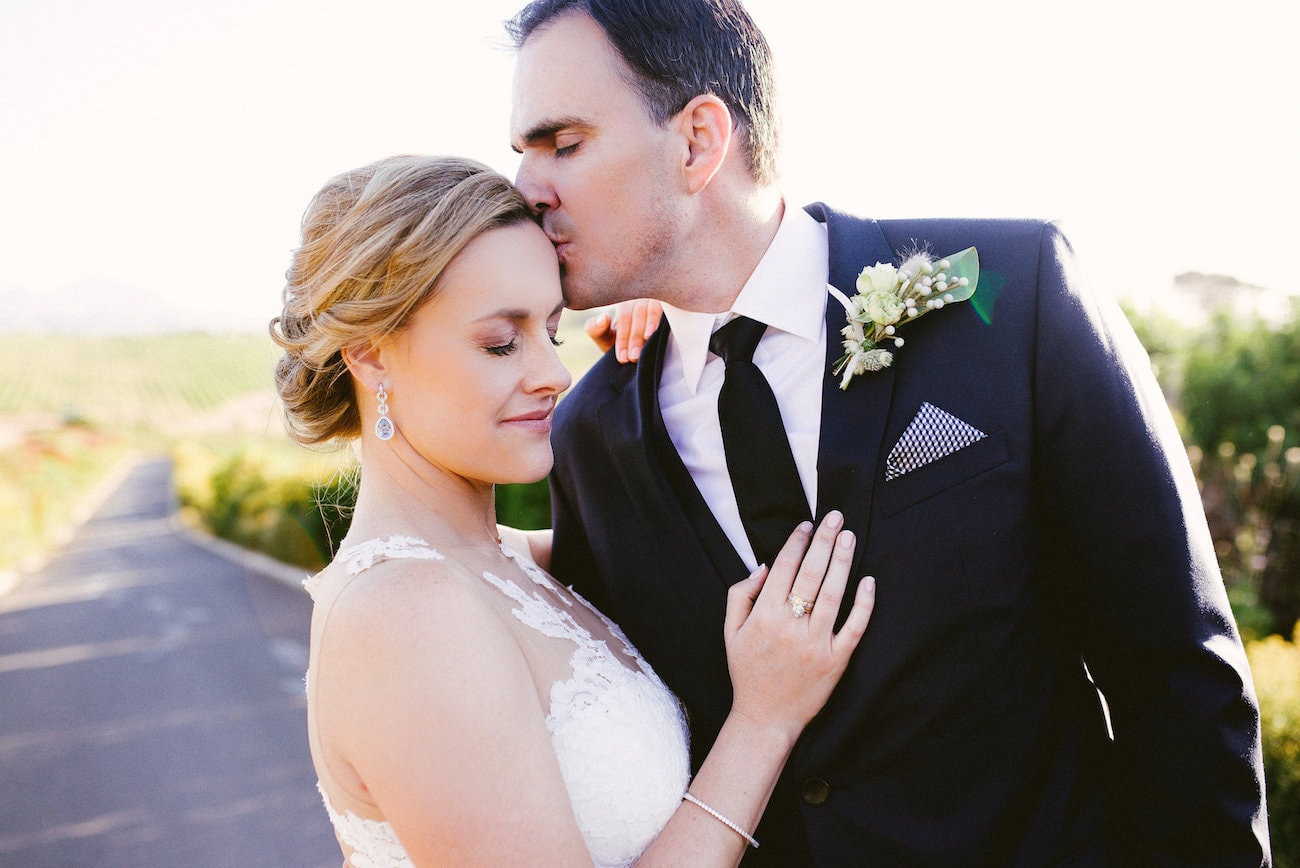 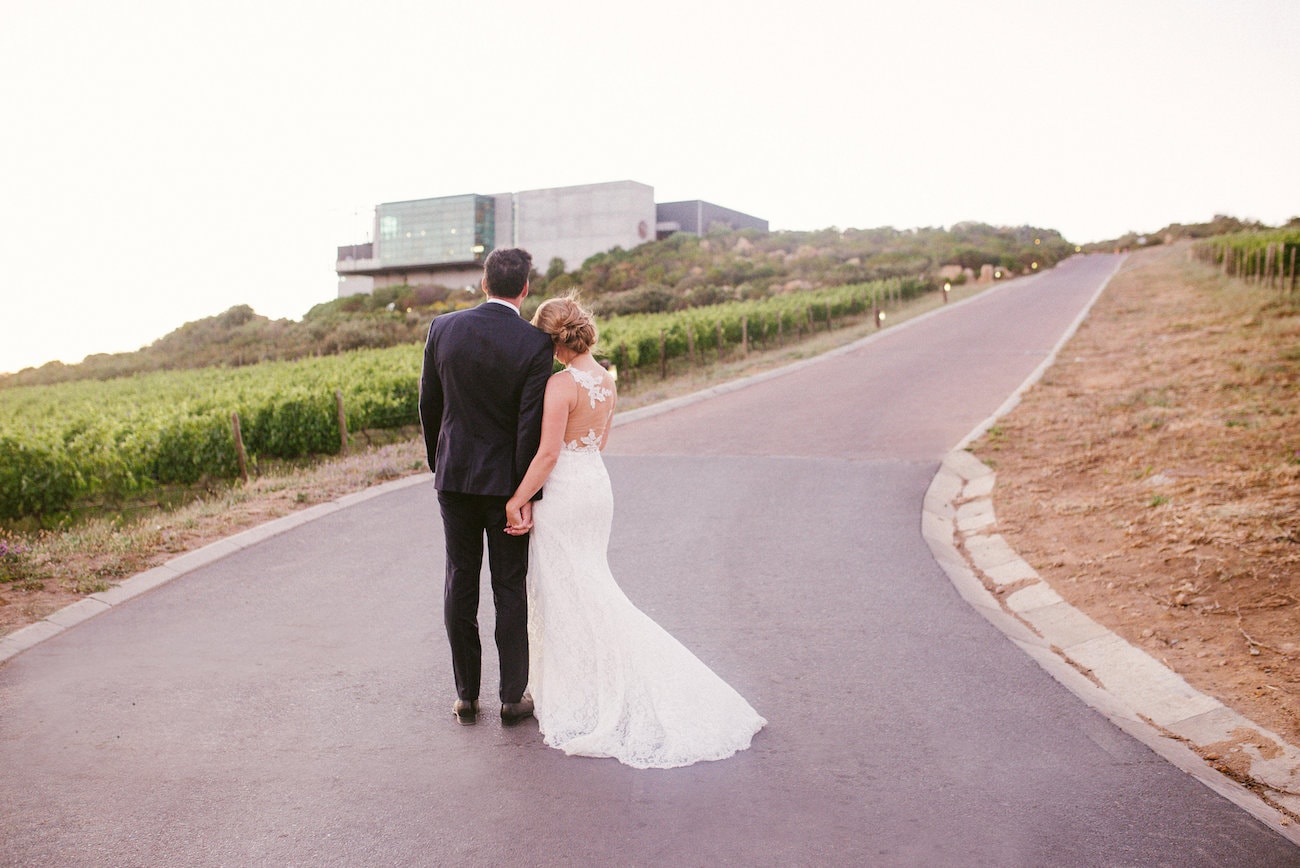 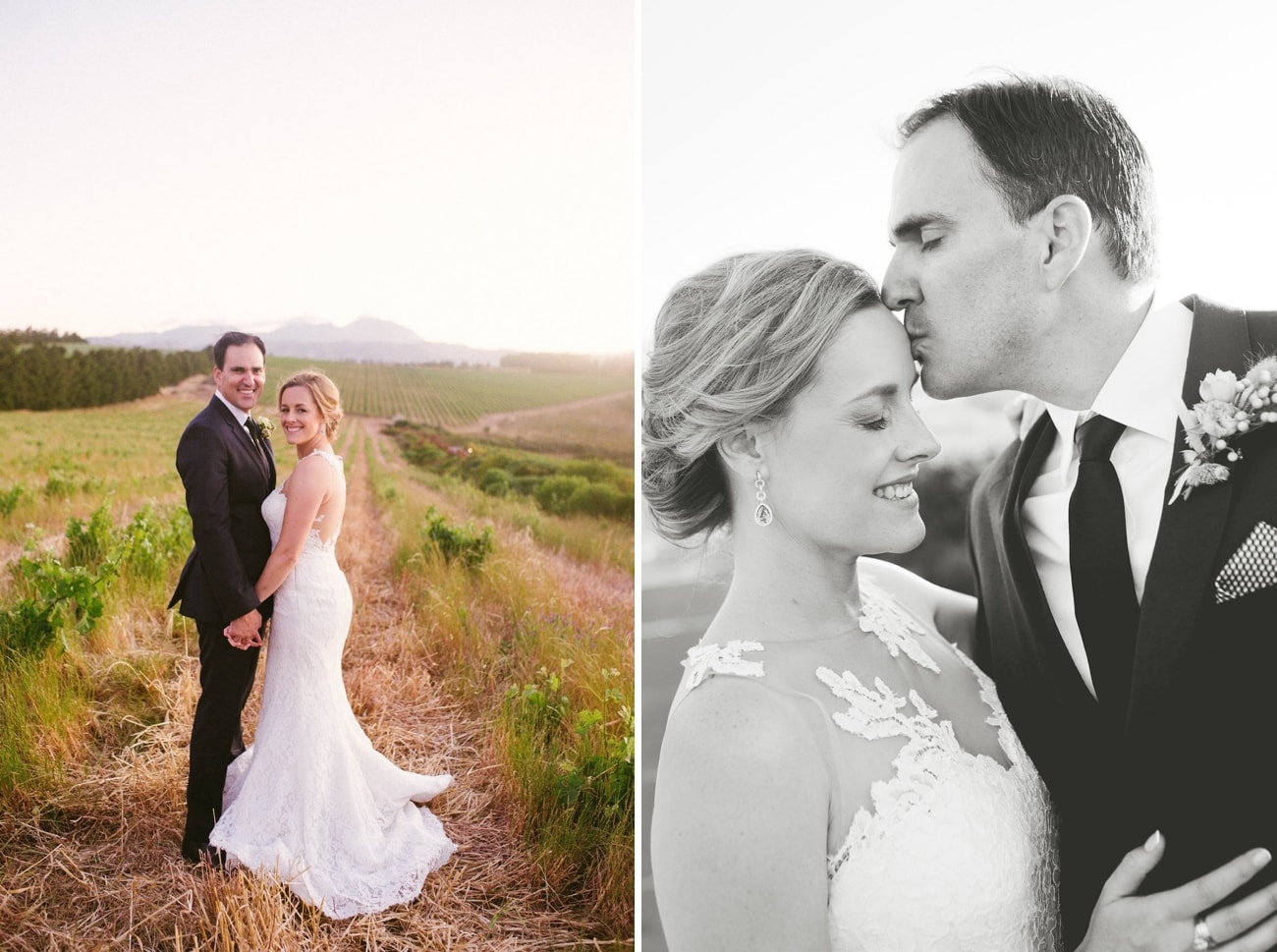 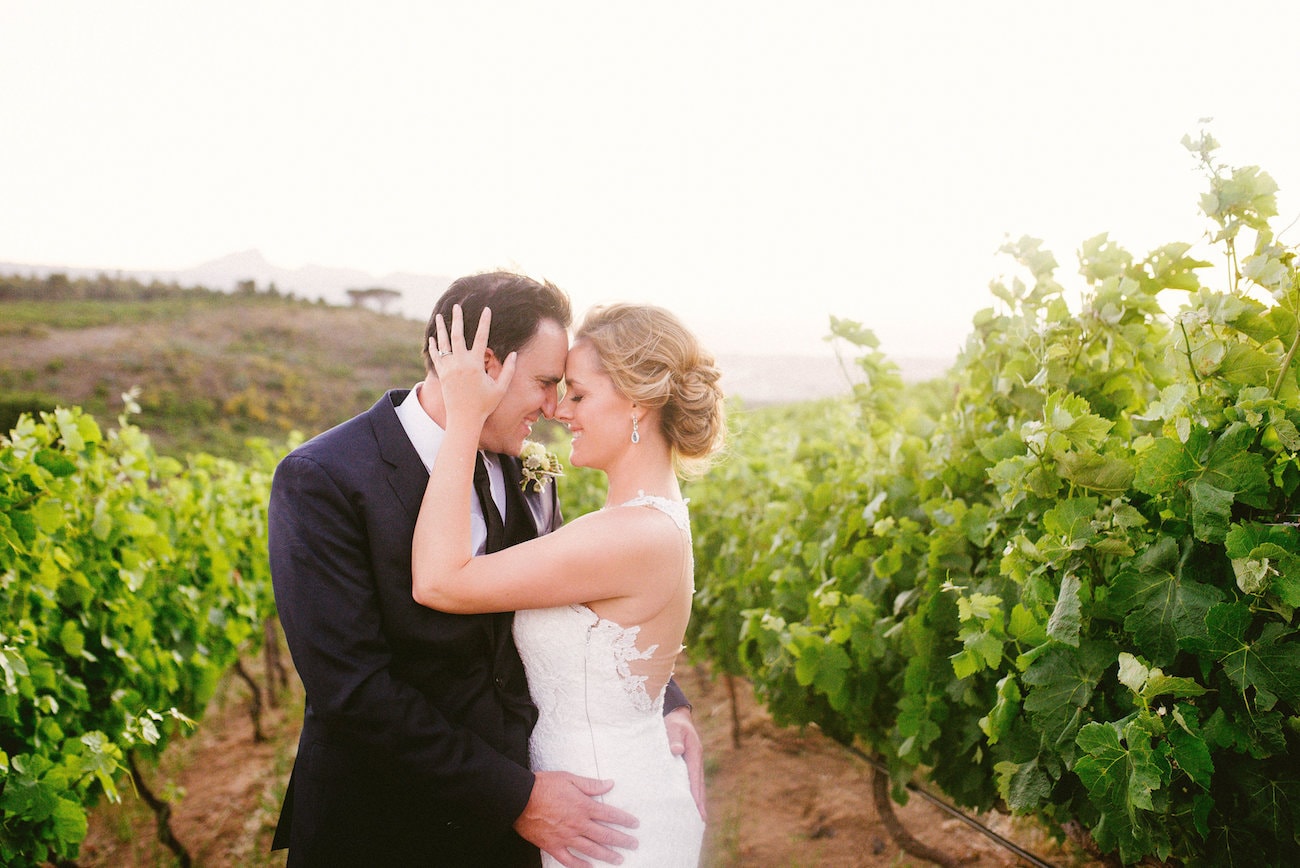 Absent Guests
My maid of honour was unfortunately only six days post-delivery and looking after her new baby in Glasgow, so couldn’t make it. More importantly, my dad was unfortunately too ill too attend. Family friends Skyped the service and watched it with him in his hospital room and my little brother perfectly delivered the speech my dad had written.

The Flowers
We know very little about flowers. I wanted proteas but otherwise seasonal and local. I didn’t even meet the florist, only Paul did, and he and Theresa co-ordinated everything and they were above my expectations. My bouquet had a King Protea in it that was bigger than my head and the bridesmaids’ bouquets were so beautiful and unique. 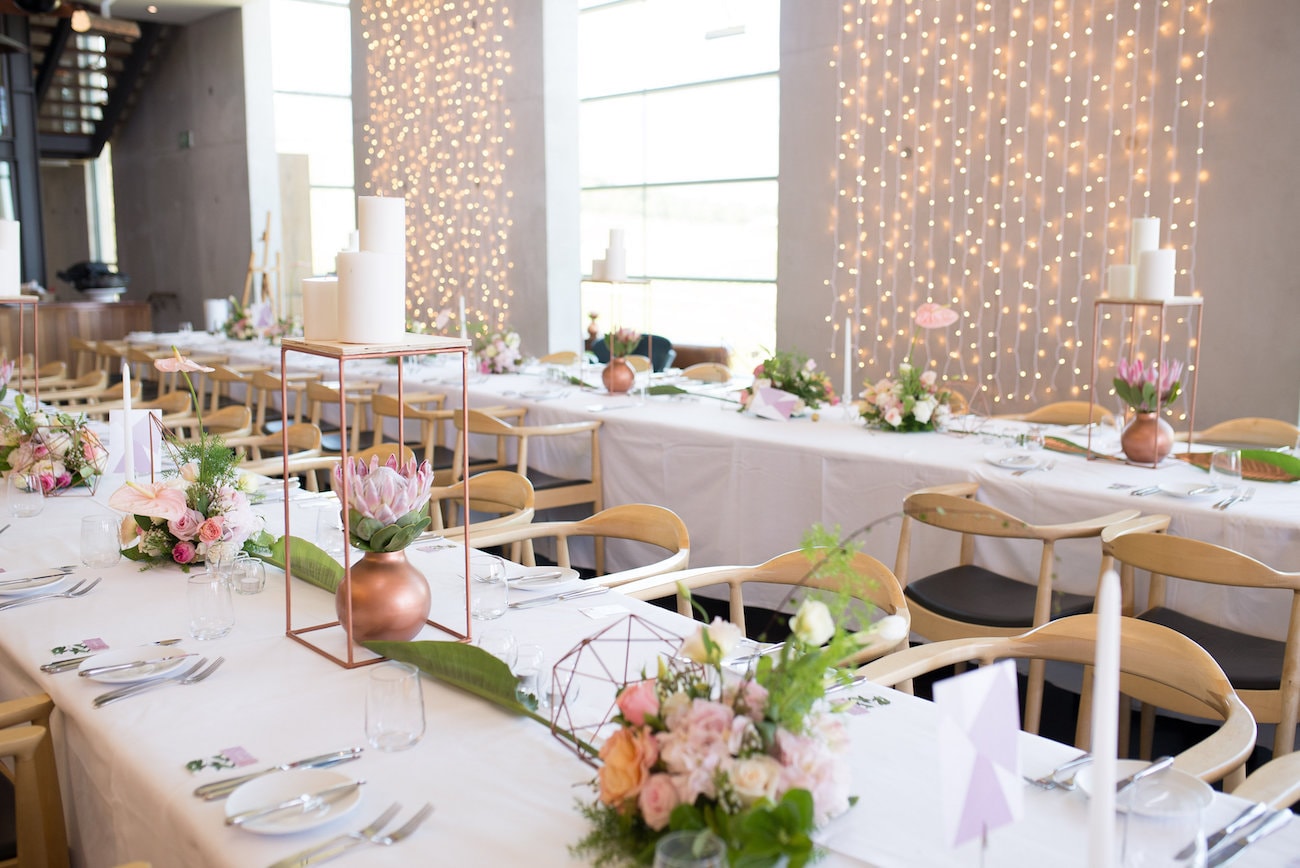 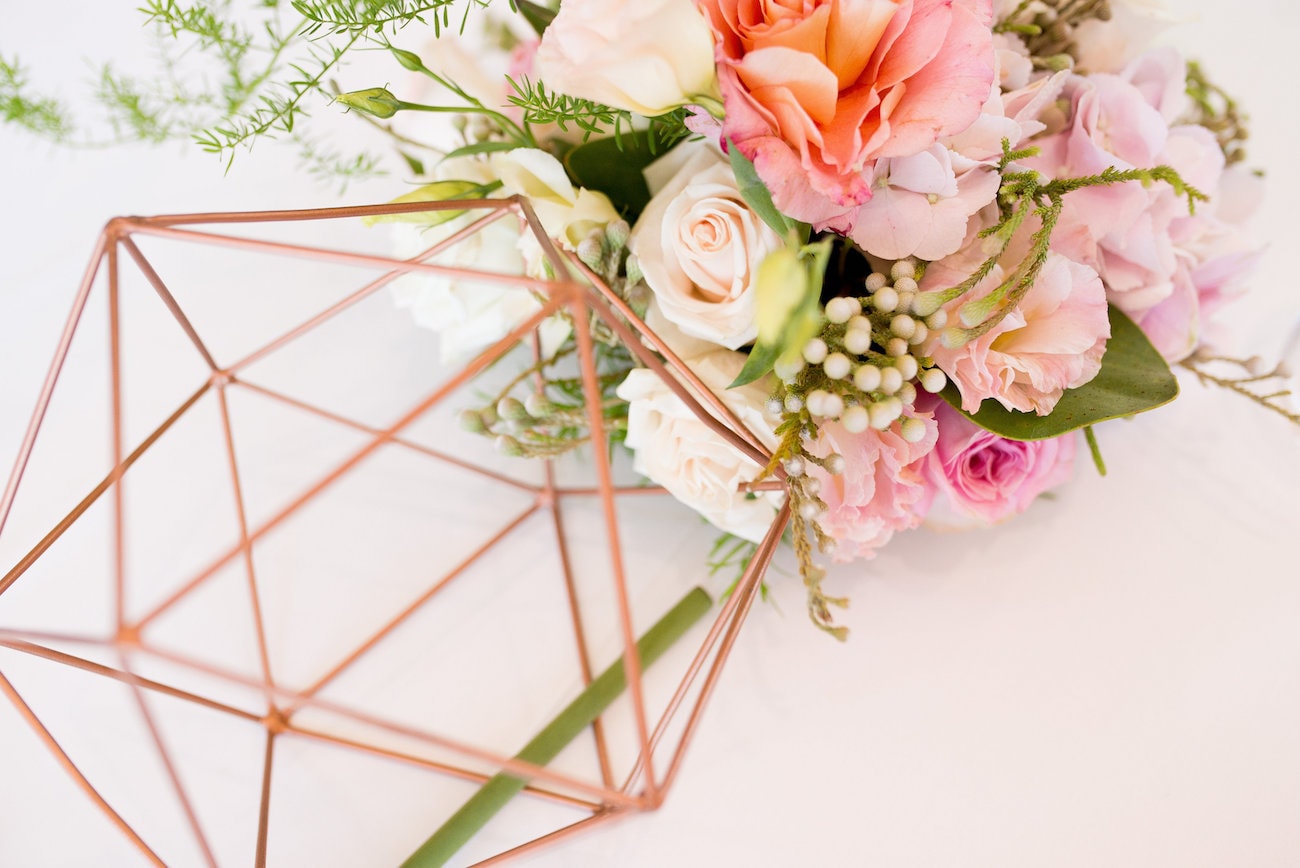 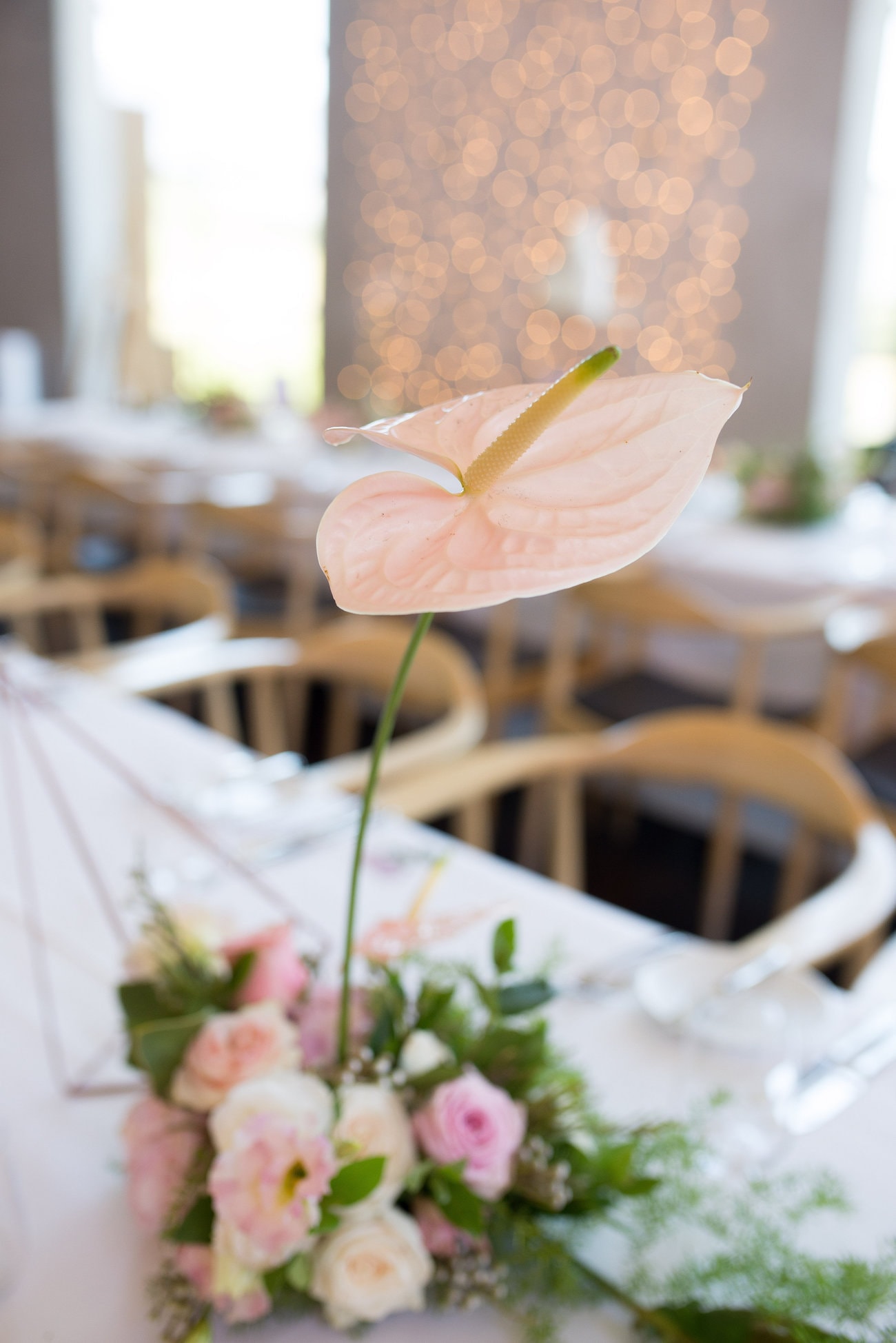 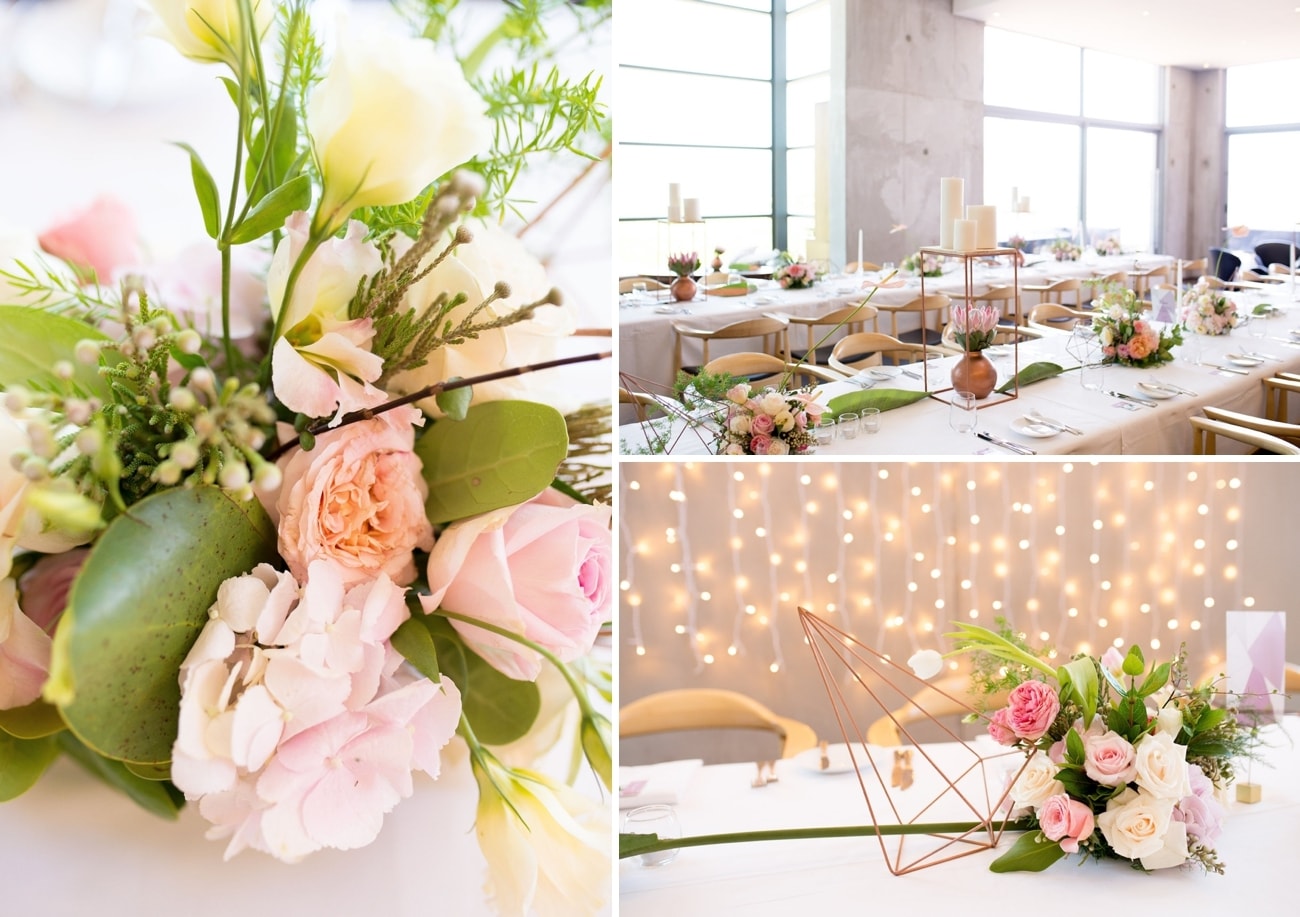 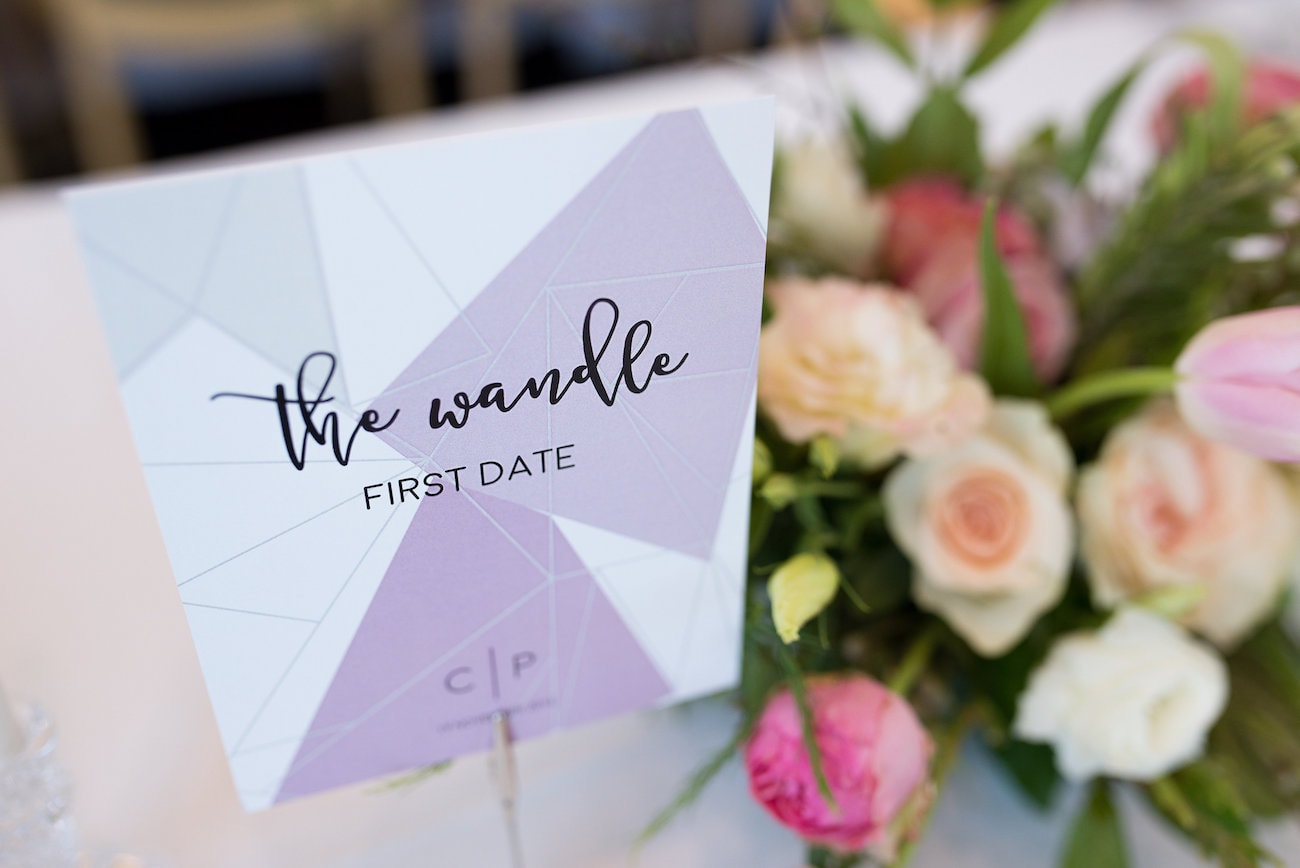 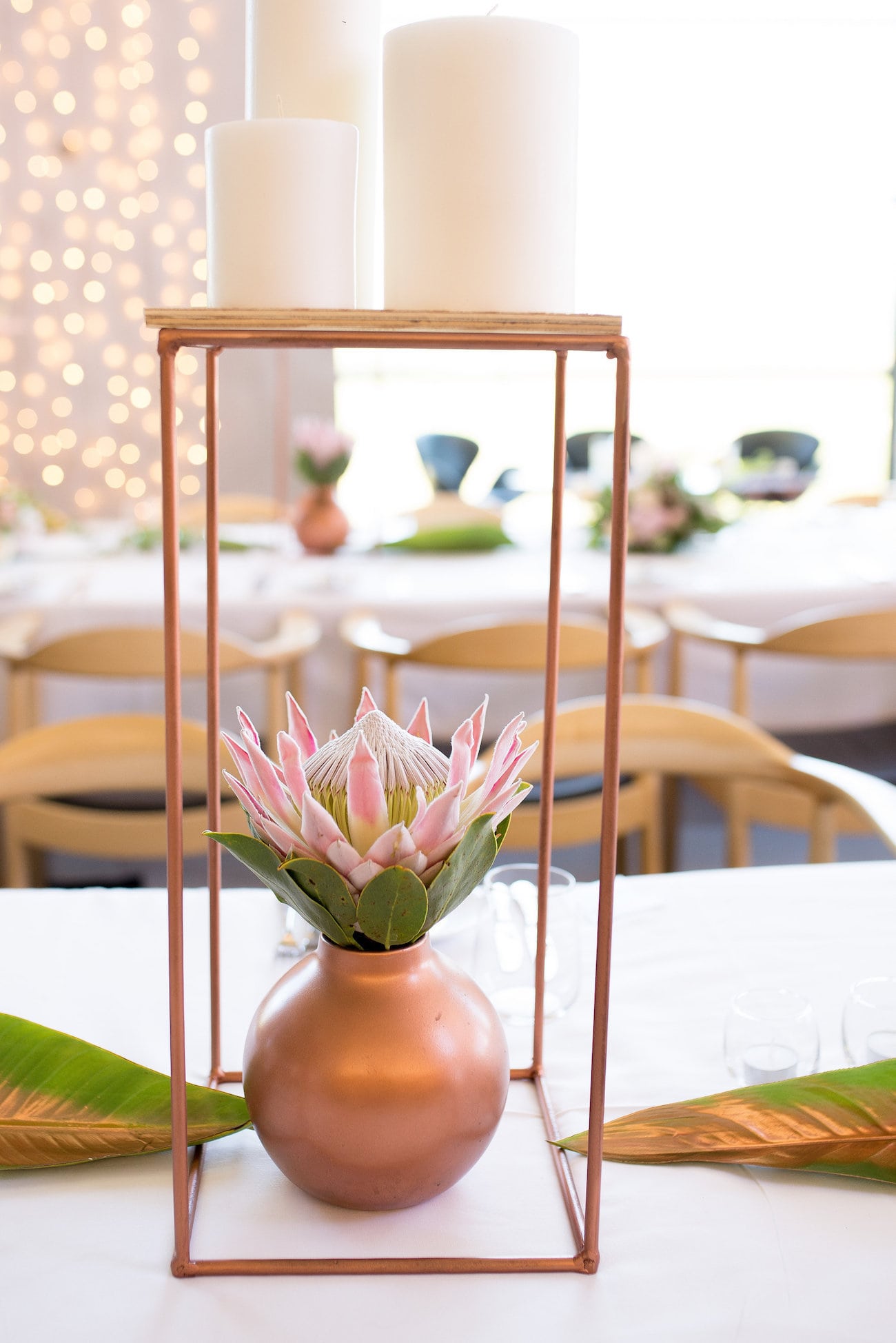 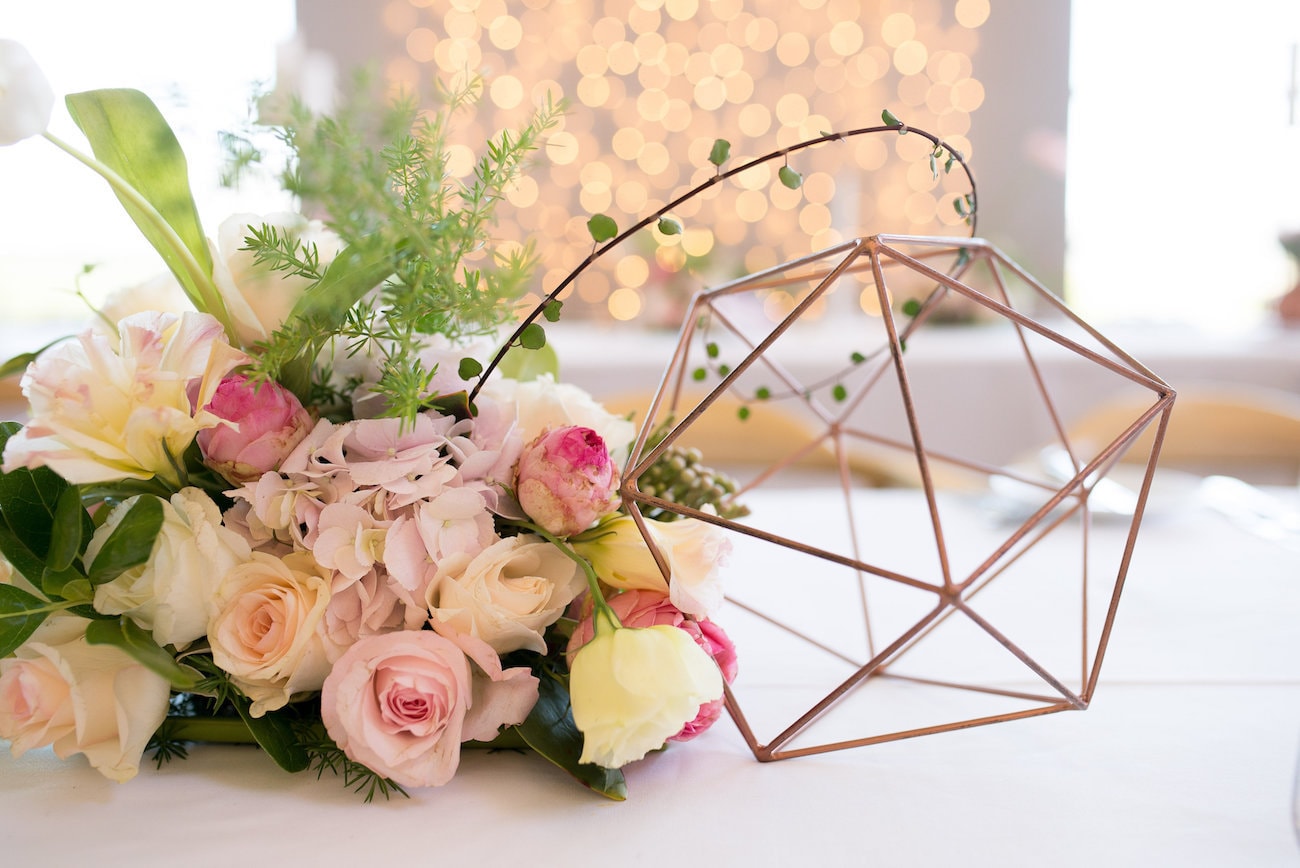 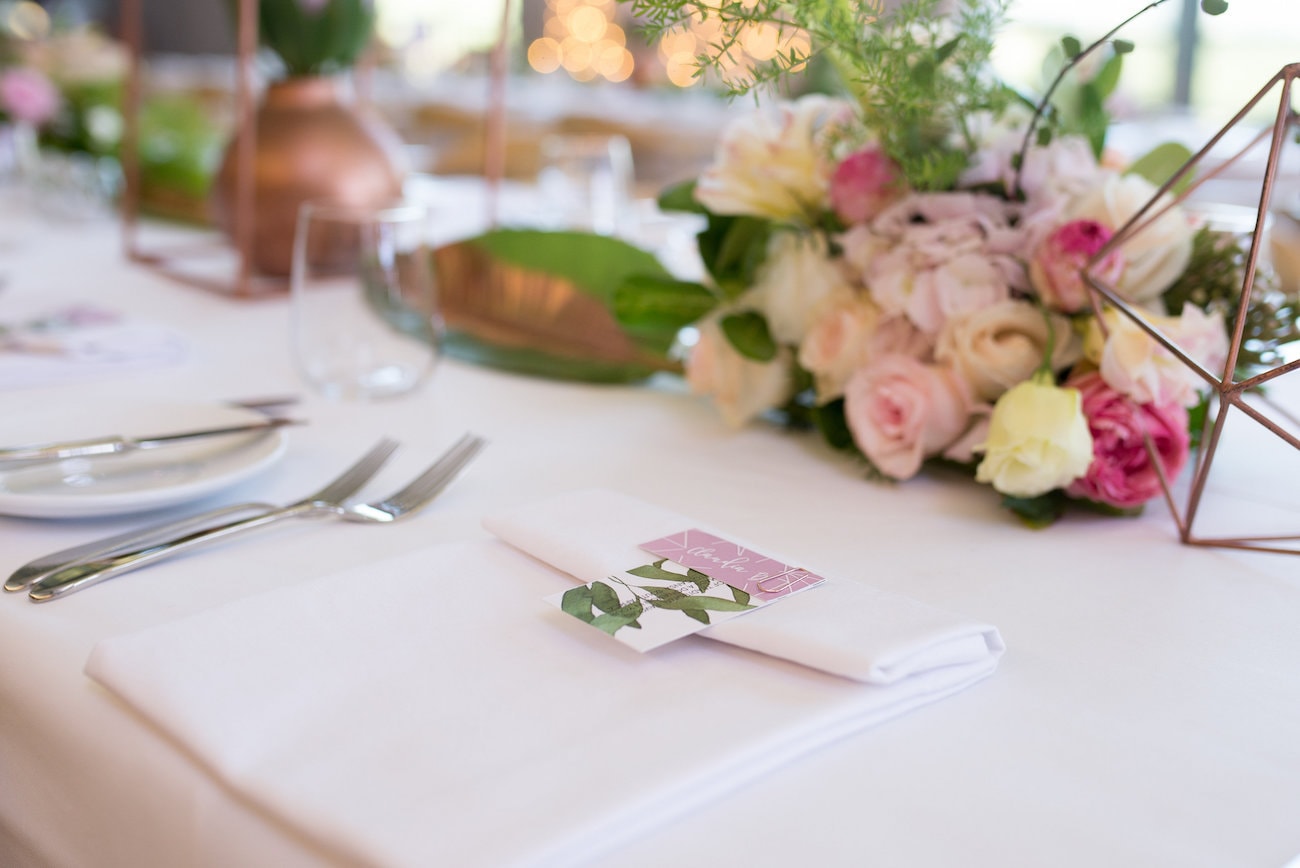 The Dress
I found it at Pronovias on New Bond Street during a fun day shopping and trying on a variety of styles. It was easily the best one. I tried on bigger dresses, dresses with huge trains and slinkier dresses. My primary goal was to able to dance and have fun in the dress. The train was short enough to dance all night even when not bustled, it was so comfortable and the service especially from the seamstress who completed the alterations was outstanding.

The Bridesmaids
I had five bridesmaids (it would have been six with my maid of honour). As my bridesmaids were located across three cities on two continents, I opted for mismatched dresses, which they could choose. I gave them a budget, a neutral colour range of blush, nude and champagne, and said it must be long, so they could wear flats or heels if they wanted to. 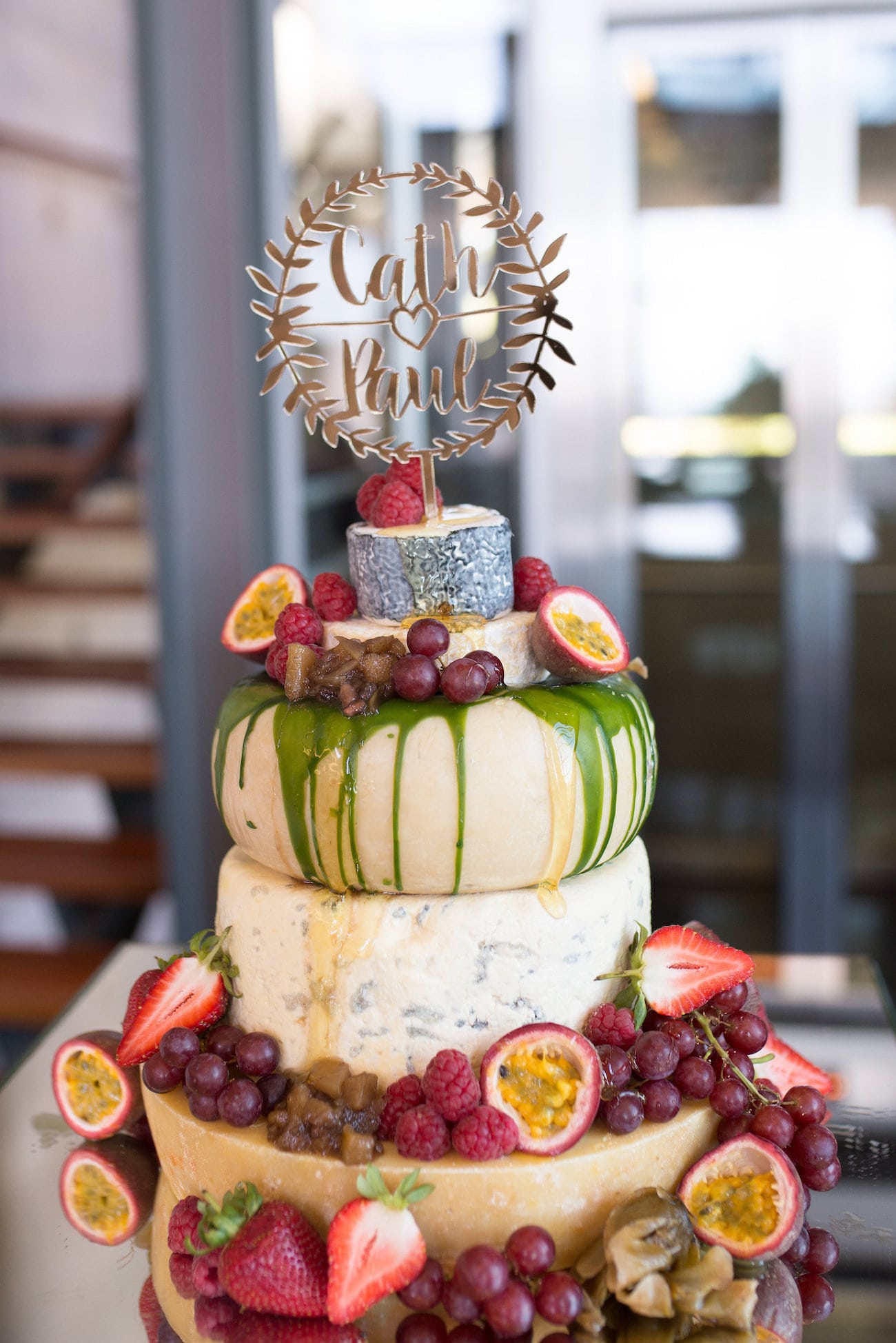 Memorable Moments
Catherine: When I tried to put Paul’s wedding band on and I couldn’t because his fingers were too fat in the heat! I burst out laughing and this moment was captured and is by far my favourite photo of the day.
Paul: When Catherine entered the wine cellar for the ceremony in the glass elevator.

Proudly South African Details
The proteas, the biltong, the kudu main course and several songs during the evening. The dance floor closed at 2am with a mass group dance to Mango Groove’s ‘Special Star’! 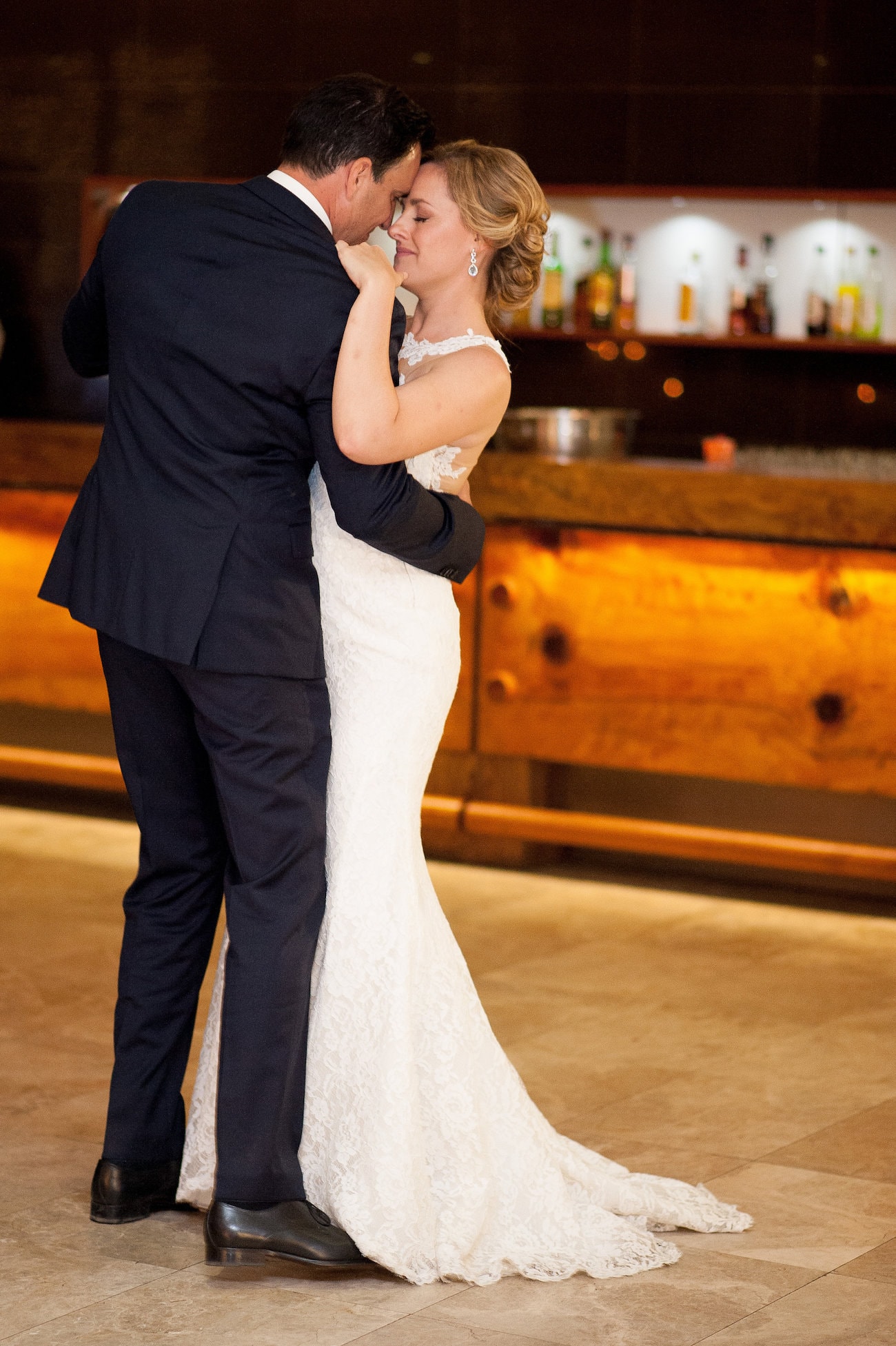 Best Decision
Hiring Theresa and choosing our venue – with the Cape winds (and they blew that day!) it provided the best indoors option with views to die for.

Advice for Future Brides & Grooms
Get a wedding co-ordinator. Don’t stress the small stuff and be flexible – it will always be an amazing day!

You can see more from this wedding on Cheryl McEwan’s blog.